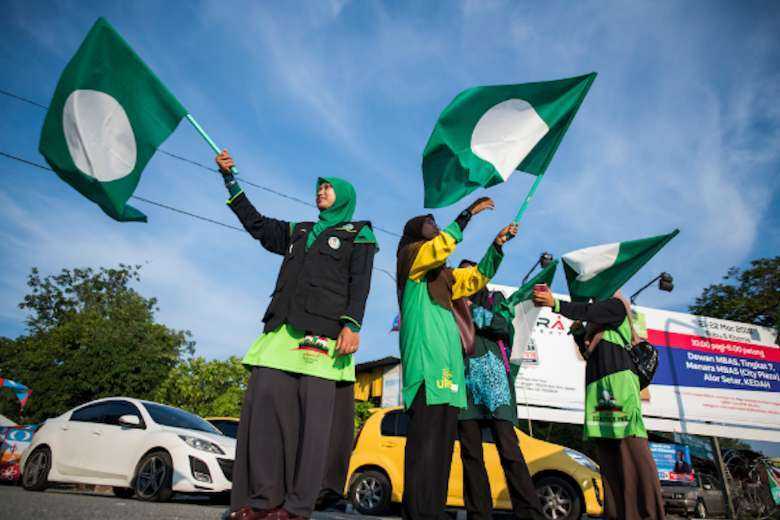 Malaysian Islamic Party supporters wave party flags on the eve of the country's 14th general election in Alor Setar on May 8, 2018. The party's president has accused Christian missionaries of preying on poor and uneducated Malaysians to convert them to Christianity. (Photo: AFP)

In a clear attempt to turn Malaysian Muslims against the country’s Christian minority, a controversial book labels Christians “the enemies of Islam” who harbor ill intentions and spread lies.

The subversive tract warns of a grand Christian conspiracy that seeks to undermine the mainstream Muslim nature of Malaysian society and bears the imprimatur of no less a religious entity than the Selangor Islamic Religious Council, a prominent Muslim organization.

First published in 2014, the hardback called Pendedahan Agenda Kristian (Exposing the Christian Agenda) is now available online in a digital format and is reportedly being shared widely by Malaysian Muslims.

That should be a matter for concern as Malaysia’s Christians, who account for around 9 percent of the country’s 32 million citizens, are increasingly beleaguered by hardline Islamists.

The book paints Christians as venal, citing several anti-Christian verses in the Quran to back up that assertion with the affirmation of holy writ. It especially warns Muslim believers against befriending Christians, who are declared in the text to be “the enemies of Islam who always have malicious intentions and are the bearers of lies.”

The book’s anonymous authors write: “Christians will try their best to create resentment among the Muslims. Muslims must be stern and careful of Christians, and we must not follow or regard them as our protectors, leaders or guardians. If we are oblivious or doubtful of the truth about Islam, then it will be easier to be influenced by the lies of the Christians.”

Christian evangelists come in for particular opprobrium and are depicted as the foot soldiers of a secret Christian conspiracy. In the book’s foreword, Mohamad Adzib Mohd Isa, a former chairman of Selangor Islamic Religious Council, insists that Christian evangelists in Malaysia are up to no good, trying as they do to weaken the hold of Islam over the land.

Harping on that same theme, the text warns Muslims that under the pretext of being friendly Christians will attempt to lead steadfast Muslims astray by enticing them to convert to Christianity.

“This Christian agenda is a highly cunning organized movement that often operates under the radar,” the Selangor Islamic Religious Council says in the book. “Their latest strategy is supposedly to be friendly with Muslims and at the same time convince them of the need to accept Christian teachings.”

Such paranoid concerns about the putative aims of Christians to convert Malay Muslims to Christianity are hardly new. Similar fears have been voiced by other hardline Islamists over the years.

A few years ago, for instance, Abdul Hadi Awang, president of the Malaysian Islamic Party, wrote a controversial op-ed in his party’s official mouthpiece in which he accused Christian missionaries of preying on poor and uneducated Malaysians to convert them to Christianity.

“They [Christian missionaries] have spread their religion not by using knowledge and reasoned argument but by baiting their targets with money and other forms of aid. This is transgression in the name of religion. It is a danger that must be fought,” Hadi wrote.

Ironically, even as hardline Islamists are accusing Christians of fomenting religious discord, it is these selfsame Islamists who are seeking to turn Malaysia into a fully fledged Islamist state where the freedoms of religious minorities such as Christians will be further curtailed.

Although Malaysia’s constitution guarantees the right of Christians and other non-Muslims to practice their faith freely and unmolested, religious freedom in Malaysia is “guaranteed on paper but shackled in practice,” according to Eugene Yapp, a Malaysian expert who is director of the Religious Freedom & Liberty Partnership and is a fellow at the St. Charles Institute, a Christian human rights agency in Malaysia.

“[Because of] the rise of [a] more extreme religious ideology emphasizing the sovereignty of Islam over other faiths, there are powerful segments within the Malay Muslim community that assert Malaysia is an Islamic state,” Yapp says.

And in a more militantly Islamist society, Christians and members of other minority faiths will find themselves even more at the margins of Malaysia’s religious landscape, experts like Yapp warn.

That is why we should hope that most Malaysian Muslims will know better than to buy into the kind of unfounded fear-mongering and blatant bigotry in which the Selangor Islamic Religious Council engages through this reprehensible book.