Britain continues to shut its doors and refuse to grant refugee status to many Christians, Muslims and Hindus 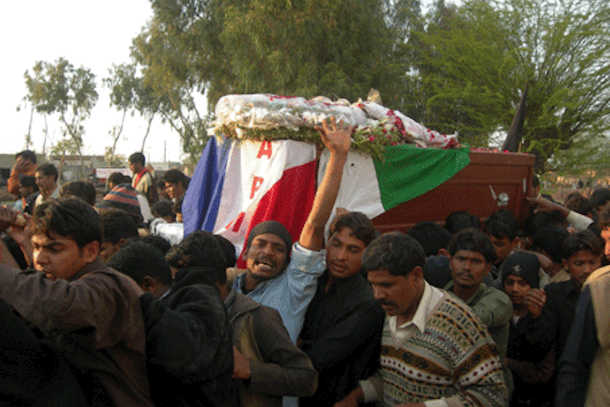 The funeral of Pakistan’s Minister for Minorities Shahbaz Bhatti in 2011. He was assassinated for attempting to secure justice for religious minority people, including Asia Bibi. (Photo: AFP)

The UK government recently sought to project itself as the champion of religiously persecuted people worldwide when it announced its Global Human Rights sanctions regime targeting those involved in religious persecution.

Foreign Secretary Dominic Raab sought to reassure the public and human rights organizations that “everyone, no matter their faith or belief, deserves to be able to live a free and safe life, wherever they are in the world.”

Unfortunately, even as Raab added that “our new global human rights regime will allow the UK to protect people of all religions, faiths and no belief against serious human rights violations and abuses,” refugee rights campaigners expressed their continuing concern that the same government’s Home Office, in keeping with its “hostile/compliant environment” policy, continues to shut its doors and refuse to grant refugee status to many Christians, Muslims, Hindus and ethno-religiously/politically targeted “others” fleeing the most extreme forms of persecution in countries such as Pakistan and Sri Lanka.

Many of these “failed” asylum seekers have traveled to and applied for asylum in the UK precisely in the hope that they could receive protection and be able to live a free and safe life.

Unfortunately, as the British Asian Christian Association (BACA) and other concerned parliamentarians, human rights campaigners, academics, investigative journalists, concerned members of the public and refugee rights organizations have discovered, the Home Office produces and relies on country policy and information notes (CPINs) that provide dangerously misleading guidance to refugee determination officers regarding the nature and extent of ethno-religious persecution in several countries.

This guidance often seeks to deny that persecution, in general, is experienced by the groups under consideration. “The 'hostile environment' approach has undoubtedly made it harder for asylum case workers to perform their functions to a standard that reflects the principle of refugee protection, the right to rehabilitation for torture survivors and respect for the rule of law,” said Sile Reynolds, senior policy adviser at Freedom from Torture.

In a book BACA published last year (Call it by its name: Persecution!, authored by myself, with an introduction by Lord Alton), the scandalous manner in which UK asylum determination case workers rely on and are dangerously misled by the Home Office’s country of origin information, assessments and guidance as presented in its CPIN was highlighted. The CPIN misleadingly, for example, asserts that “Christians in Pakistan are a religious minority who, in general, suffer discrimination but this is not sufficient to amount to a real risk of persecution.”

Just four months ago, during a UK All-Party Group for Pakistani minorities meeting to commemorate the ninth anniversary of the assassination of Pakistan’s Minister for Minorities Shahbaz Bhatti (who was assassinated for attempting to secure justice for religious minority people, including Asia Bibi, who were being persecuted), Lord Alton “said that if Pakistan’s authorities had failed to bring to justice the murderers of a government minister, what prospect of justice is there for people from beleaguered and persecuted minorities?” He criticized the UK Home Office for not recognizing the continuing attacks on minorities as persecution but simply calling it discrimination.

“In recent years, the world observed how Asia Bibi fought for justice in Pakistan. [Falsely] accused of making blasphemous statements during an argument about drinking water from a well, she was acquitted last year after spending eight years on death row. Several months later, she managed to leave Pakistan in pursuit of a safe haven. I pay great tribute to Canada for providing sanctuary — unlike the UK and other countries who shamefully turned their eyes away,” said Lord Alton.

In my latest book, UK Home Office Denialism of the Persecution of Christians, Muslims and Hindus in Sri Lanka (also published by BACA, due for release next month), the highly selective, problematic and dangerously misleading guidance and advice/assessments that are presented in the Home Office’s CPIN are subjected to critical scrutiny.

Flawed refugee status determinations can arise (and surely will have arisen) as a consequence of reliance of this CPIN for an accurate and comprehensive assessment of country of origin information and the extent of persecution taking place in Sri Lanka of religious minorities.

The current “hostile/compliant environment” policy as well as the strategy of using inaccurate and misleading CPINs to deport religiously/ethno-religiously persecuted asylum seekers is a scandal and is incompatible with the British government’s supposed and projected policy of championing, recognizing and identifying the persecuted status and asylum/sanctuary needs of Christians and targeted people worldwide and acting to protect and secure free and safe lives for them, wherever they are in the world (even if they happen to be in the UK, claiming asylum from ethno-religious/religious persecution).

As Margaret Owen notes in the introduction to the book: “As a human rights lawyer myself, I have been shocked by the abysmal failure or refusal of the Home Office to seek evidence and information from human rights and civil society organizations with close contacts in Sri Lanka that could inform it on the realities on the ground and of the brutal persecution and torture that asylum seekers from Sri Lanka have experienced.

“My own NGO, Widows for Peace through Democracy, is well aware of the precarious status of not only the many widows but of the ‘half-widows’ (wives of the missing or forcibly disappeared), many raped and tortured, who have lost their lands, and are continually threatened when they seek some restorative justice or information on the fate of their loved ones, but the Home Office (unlike, for example, the Canadian Immigration Bureau) has no interest in hearing from independent bodies like us when such women arrive on our shores to seek refuge.

“I recall with particular anger and shame the dismissal, a few years ago, of asylum applications from Tamil women, victims of rape by the Sinhalese police and army. Their stories were dismissed and these women were deported back to Sri Lanka to face further persecution, imprisonment and sexual torture because they had dared to describe to the UK the state’s crimes. I also am reminded of cases where Tamil asylum seekers who presented medical reports showing the physical scars of torture were not only not believed but were accused of self-harm as their cause.”

BACA appeals to concerned parliamentarians, ministers, human rights campaigners, public interest, faith and non-faith bodies and concerned members of the public to raise these issues of concern with the UK government and the Home Office in the hope that persecuted people seeking asylum in the UK can be offered an opportunity, as Dominic Raab pledged, “to live a free and safe life, wherever they are in the world.”

Desmond Fernandes is a former lecturer at De Montfort University in England and a member of the British Asian Christian Association. The views expressed in this article are those of the author and do not necessarily reflect the official editorial position of UCA News.