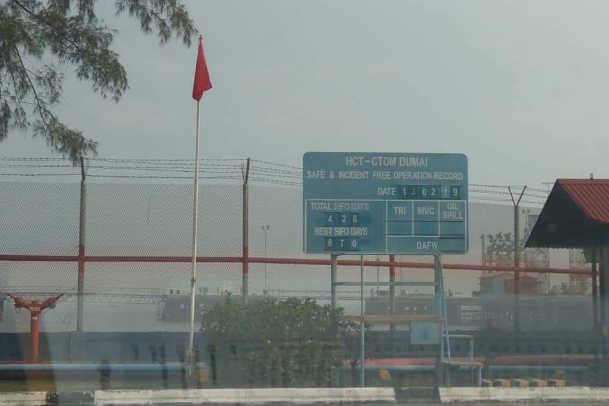 Air quality in Dumai city in Riau province on the island of Sumatra reached a dangerous level on Feb. 13 due to haze seen in this photo from peatland forest fires. (Photo by Riko Kurniawan/WALHI Ria)

A province on the Indonesian island of Sumatra has declared an eight-month emergency period to deal with peat fires despite President Joko Widodo having claimed there that there had been no such blazes for several years.

The administration of Riau province made the emergency declaration on Feb. 19, just days after President Widodo denied there were ongoing environmental problems in this regard.

Governor Wan Thamrin Hasyim said peatland fires had become widespread in some areas in recent weeks. He also said that weather forecasters are predicting a long dry season ahead.

At least 843 hectares of land have already been burned, according to the National Disaster Mitigation Agency.

Slash-and-burn techniques are used illegally to clear vast tracts of land for palm oil as well as pulp and paper plantations. The dry season brings wildfires, which can fill the region with acrid haze

Nugroho said the local disaster mitigation agency has worked with police and military personnel to combat fires, including by using water-bombing helicopters.

However, the next day he corrected himself, saying there had been a small number of fires but the impact was low and there had been no complaints for several years from neighboring countries such as Singapore and Malaysia.

In 2015, thick haze blanketed the Indonesian islands of Sumatra and Kalimantan, damaging the environment and economy and forcing school closures as well as causing widespread acute respiratory infections.

Data from the Environment and Forestry Ministry shows that the number of so-called fire hotspots in the country decreased from 70,971 in 2015 to 9,245 in 2018.

Meanwhile, Riko Kurniawan, executive director of the Riau chapter of the Indonesian Forum for the Environment, urged the local government to stop fires by paying more serious attention to law enforcement.

"What the government has done so far is to put out fires instead of enforcing the law," he told ucanews.com. He stressed that peatland forest fires are mostly caused by illegal agricultural practices.

He also noted the importance of a new review of peatland management and restoration to prevent fires from recurring.