Korean Catholics not keen on their new president 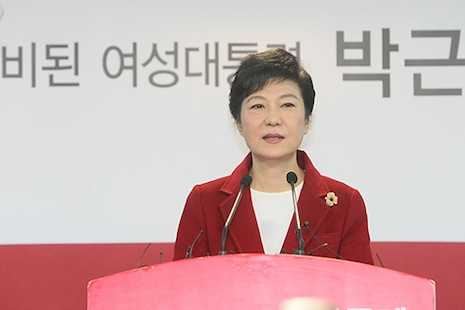 Most Catholic hearts would have sunk when the news broke on December 19 that Juliana Park Geun-hye had won Korea's presidential election.

With just one or two exceptions, she holds views that diametrically oppose the Catholic community's, on burning issues such as the death penalty, construction of new nuclear plants, free trade agreements, the Four Rivers dam project and the Jeju naval base.

"It is a pity," Father Jang Dong-hun admitted to ucanews.com.

In October, as secretary of the bishops’ conference committee for justice and peace, Fr Jang sent a questionnaire on various social and political issues to the election's main candidates, to analyze whose opinions are closest to the Church’s teachings.

Only one of the contenders did not reply; it was Park.

However, her opinions can be summarized through various speeches and declarations. She is a keen supporter of keeping the death penalty and of free trade agreements. She believes the construction of a giant naval base on Jeju Island, a natural beauty spot, is essential.

On the highly controversial Four Rivers project she has remained silent, and she appears cautious on the notion of building more nuclear reactors.

But Father Jang fears that her regime will continue and even deepen the trend started by her predecessor.

“For the past five years under President Lee Myong-bak, money became the prime factor in Korean society, while everything else went unheeded.”

Park, 61, is the daughter of the late president Park Chung-hee who ruled South Korea with an iron fist from 1961, when he led a military coup, until his assassination in 1979.

He pioneered the industrialization of Korea and is credited by many with leading the nation out of poverty to its present state of prosperity. But he was also a ferocious suppressor of human rights and democracy.

The Catholic Church largely opposed his dictatorship and several clergymen including the late Bishop Daniel Tji Hak-soon of Wonju were imprisoned.

Park Chung-hee professed no religion and seemed to dislike all forms of faith equally. His daughter was baptized as a Catholic while a student at the Jesuit-run Sogang University, but in more recent years she too has said she follows no religion.

Some Catholics are doing their best to put a positive spin on the election result. Fabiano Choi Hong-jun, president of the Catholic Lay Apostolate Council of Korea, said that as more than half of the voters supported Park, it could be good for national unity. In previous elections, the large number of main candidates split the vote and led to no strong majority.

He expressed the hope that "Park embraces her opponents and makes a society where people can trust and communicate with each other."

“As a Catholic leader, I hope she takes more interest in Catholic social teaching and makes society respect life and human rights."

Park has promised to give more attention to what she calls "the grassroots economy," especially women. But Elizabeth Choi Guem-ja, co-representative of the Korean Catholic Women’s Community for a New World, is skeptical. “Park is a woman but I’m not sure if she is a ‘prepared woman president' as she lacks feminist policies," she said.

Fr Jang seemed very clear on what the Church's stance should be towards the new incumbent. “Juliana Park was elected by the halo of the so called ‘myth of Park Chung-hee’ and the money worship that dominates Korea," he said.

"In this situation, our Church has a historical responsibility to change the current by carrying the torch of justice and common good.”