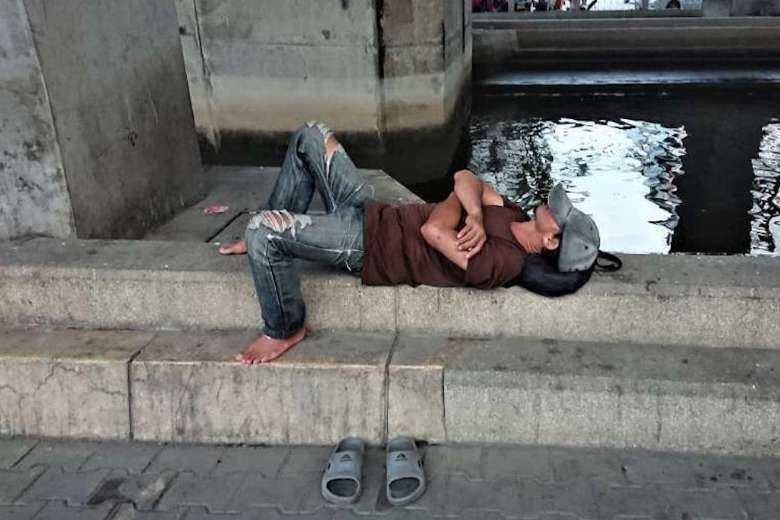 A homeless man sleeps beside a canal under an expressway in central Bangkok. (Photo: UCA News)

An 80-year-old Thai man was driven by his daughter and her husband to a village temple in the northeastern province of Nakhon Ratchasima on July 25 and left to his fate, lying helplessly on a dirt trail leading to the Buddhist monastery of Wat Pa Suan Thamma Sawaddee.

The octogenarian, who was infected with Covid-19, was likely dumped by his daughter so that she would not have to take care of him during a raging months-long outbreak of the contagion that has seen human misery reach endemic proportions.

“Abandoning someone that is old and sick is an awful thing to do, and to do it to your own father is unforgivable and unimaginable,” a commenter noted.

The day before, another octogenarian was found lying alone at Victory Monument in the heart of Bangkok. Vendors plying their trade nearby discovered the 80-year-old man and alerted health officials, who arrived too late as he had already died, with Covid-19 suspected as the cause.

In a bag with his personal belongings was medication for diabetes and the man may have been homeless for a while.

Meanwhile, the morning after the old man was abandoned to his fate in the care of Buddhist monks in the northeast, two young girls, aged seven and nine, awoke at their home in Samut Prakan, near Bangkok, to find their 44-year-old mother lying unresponsive on the floor beside them.

As health workers wheeled their mother’s body away, the two girls cried and looked at each other

Their mother, the girls realized, had died during the night. The woman, a masseuse and single mother, had been severely ill with Covid-19 for days and, without available hospital beds, she had been forced to self-medicate at home with some medications from a doctor until finally she succumbed to the deadly pathogen.

“As health workers wheeled their mother’s body away, the two girls cried and looked at each other,” an online newspaper reported.

The unfortunate woman and her daughters, who too tested positive for the virus and are receiving treatment, have become further victims of a deadly pandemic that shows no sign of abating in the Southeast Asian nation where nearly 530,000 people have been infected and 4,300 people have died so far, according to official figures.

The statistics, however horrendous, provide a mere glimpse of the tragedies that take place daily across Thailand in the grip of disease, death, misery and grief.

In recent days several sick Thais have died alone on streets around Bangkok, with the city’s medical facilities having been stretched to their limits to such an extent that citizens without adequate connections and financial means are left to their own devices when they or relatives become infected. Others have died at home in the company of their loved ones but without proper medical care.

Seemingly few people of modest means have been left unaffected in one way or another in Thailand’s unfolding Covid-19 tragedy. In addition to the toll on the sick and dying, the pandemic, whose end is nowhere near in sight, has caused widespread destitution among penniless and jobless people.

Not even expatriates from the West, known collectively as farang by Thais and relatively well off compared to many locals, have been spared the effects of an crisis that has destroyed lives and livelihoods.

“Saw a destitute farang, dirty and with a small bag of belongings beside him, lying asleep on a bus shelter bench on Sukhumvit Road yesterday mid-afternoon,” Colin Hastings, a British journalist and long-term Bangkok resident, noted in a recent Facebook post, referring to a major road along which many of the city’s expats live.

“In the past I’ve seen Westerners on the street sleeping off a night on the town, but never someone who I thought was in a genuinely desperate state,” Hastings went on. “Quite a few locals in the same situation nearby.”

I love Thailand but there is no way for me to stay here anymore. Farang friends of mine have been leaving in droves in recent weeks

Other expats have lost their businesses and ended up being ruined financially as a result of repeated and often inconsistent lockdowns imposed by the government in an abortive effort to stop the spread of the coronavirus. The economic fallout from the lockdowns has been devastating for Thailand’s tourism-dependent economy and countless local businesses.

Gerald, a Canadian expat who asked to be identified only by his first name, was forced to close his bar last year on the resort island of Koh Samui, which caused him significant losses. Earlier this year he relocated to Udon Thani, a town in northeastern Thailand, where he opened a kebab shop.

That too he has been forced to close. Now, after a decade in Thailand, Gerald is penniless and planning to leave the country next month.

“I love Thailand but there is no way for me to stay here anymore,” he told UCA News. “Farang friends of mine have been leaving in droves in recent weeks.”

Yet expats on the move, however dire their situation in Thailand, are still more fortunate than many underprivileged locals stuck in a country in the throes of a pandemic.

Take the two young girls who watched their mother die at home. They are bound for an orphanage, according to officials.