Even at 83, 'Mother Teresa of Mithapur' has no intention of abandoning the mentally ill people she helps every day 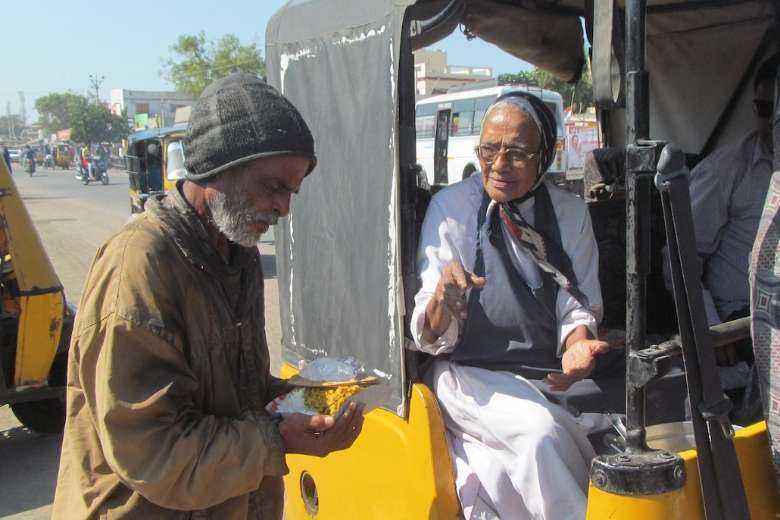 At the age of 83, Sister Elsie Vadakkekara never misses her appointment with the poor on the streets, not even during a pandemic lockdown.

Summer, winter or in pouring monsoon rains, the Catholic nun is on the streets at midday every day to distribute food to mentally ill people living rough in her neighborhood in western India's Gujarat state.

Sister Elsie is a member of the Sisters of St. Ann of Providence congregation based in Mithapur in Rajkot Diocese. She has defied the pandemic's threat to her life to feed these abandoned people, a passion she has continued for a decade.

“I cannot sit in the comfort of my convent when my people are left fending for themselves, especially during this pandemic lockdown,” Sister Elsie told UCA News.

Authorities have imposed a strict lockdown in most parts of Gujarat since April, when a second Covid-19 wave began to surge in the area, infecting thousands of people and killing hundreds daily.

Gujarat is among the worst-affected areas in India, where more than 3,000 people die and at least 300,000 new positive cases are added daily, according to government data.

“At this time, can I sit at home letting them go hungry?" asks Sister Elsie, adding that even in normal times nobody cared for those she helps. “I cannot take any risk with their lives.”

The nun is fondly addressed as “Mother Teresa of Mithapur” in a reference to St. Teresa of Kolkata, known internationally for her work with the poorest of the poor in the slums of eastern India.

“I am ready to give up my life for them but cannot stop feeding them as long as I am able to move,” said the bespectacled nun. When asked if she is worried about contracting the coronavirus, she said she "will not die earlier than the God-decided day.”

She feeds some 50 mentally ill persons on the streets between Mithapur and Okha port, covering a distance of 15 kilometers. The nun carries cooked food — rice, vegetables, chapatis, lentils and a water pouch — in a three-wheeled auto rickshaw. Driver Sanjay Siruka said they stop at some 45 locations to serve food.

“As soon as they see our vehicle, they rush towards it and receive the food in their hands from Sister,” Siruka told UCA News.

Before the pandemic outbreak, the nun used to hug the women and bless the men by touching their head or shoulder. She chatted with them so closely.

“Some listen and respond with a smile, others without any expression,” said Siruka, adding that the nun had to stop such practices in compliance with Covid-19 protocols.

Siruka said she distributes the food according to each person's need. Some people get up to 10 chapatis, while others get three and other items daily.

“What we provide is sufficient for a person to eat at least twice in a day, but our target is that they should have at least one full meal,” she said.

Sister Elsie was forced to suspend her work for a month during the nationwide lockdown that began in March 2020 during the first wave of Covid-19.

Father Vinod Karumalikal, the nun’s former parish priest, said church officials wanted her to discontinue the food distribution because of her advanced age and the pandemic situation. “But she is not ready … she says she is ready to die of Covid but would feel bad if they are not fed,” the priest said.

Though other nuns from her congregation tried to take her place, Sister Elsie stoically continues her work.

In some cases, the mentally ill refuse to collect food from her, apparently because they are frightened or for other unknown reasons. On a couple of occasions, they collected food then threw it away. Other sisters have recently joined her to distribute food to show their support, said Father Karumalikal.

Sister Elsie said she started the project following the request of a former parish priest, Father Titus Mandy. He saw a mentally ill man eating cow dung while sitting on the road and wanted the nuns to help.

“When he sought help, I volunteered and the project was launched on December 25, 2010,” recalled the nun.

“Witnessing has more value than preaching,” the prelate told UCA News. “In a situation like the pandemic, Sister Vadakkekara has shown that love transcends everything.”