Eight to hang for murder of Bangladeshi publisher 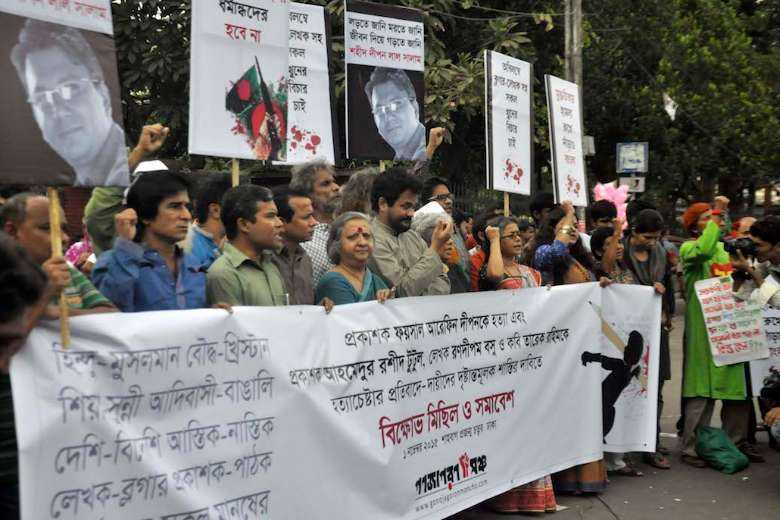 Activists demand justice for Faisal Arefin Dipon in November 2015 after he was murdered by Islamic militants in Dhaka. (Photo: Stephan Uttom/UCA News)

Eight Islamic militants have been sentenced to death by a Bangladeshi court for the murder of a publisher of books about secularism and atheism.

Judge Majibur Rahman, sitting at an anti-terrorism tribunal in Dhaka, passed the death sentence on Feb. 10 for the killing of Faisal Arefin Dipon of the Jagriti Prokashoni publishing house.

Dipon was hacked to death with sharp weapons in his office at a crowded market in central Dhaka in October 2015.

He had published books by Avijit Roy, a US citizen of Bangladeshi origin who was killed by Islamic militants in the same way in February 2015.

The judge ruled that the prosecution had proved the charges against all the accused for the “heinous” offense.

The verdict was announced in a packed courtroom in the presence of six defendants. Another two, including sacked military official Sayed Ziaul Haque Zia, remain at large.

The judge had earlier issued arrest warrants for them. The prosecution said they belonged to the banned militant outfit Ansar al Islam.

“We have lagged far behind the practice of free thinking in Bangladesh because of those killings. Sadly, radical extremist Islamist groups have actually been supported by the government to thwart free thought and freedom of speech,” Billah told UCA News.

He said one trial is not enough evidence to say that the judiciary is working independently or quickly.

Father Albert Rozario, a member of the Catholic bishops’ Justice and Peace Commission, said justice is welcomed but the Catholic Church does not support the death penalty. Only God can take our lives.

"Killing a criminal is not the solution. They should be given a chance to be repaired. If necessary, they should be kept in jail for life. The government is under a little pressure now for various reasons. As a result, this verdict may come to divert the attention of the people.” Father Rozario told UCA News.

“But those who practice free intellect must be given the opportunity to speak freely.”

In response, the government has launched a crackdown that has resulted in dozens of militants being killed in shootouts and hundreds arrested and facing trial.