The blaze, blamed on an electrical fault, hit the Abu Sifin church in working-class Imbaba district, west of the Nile River 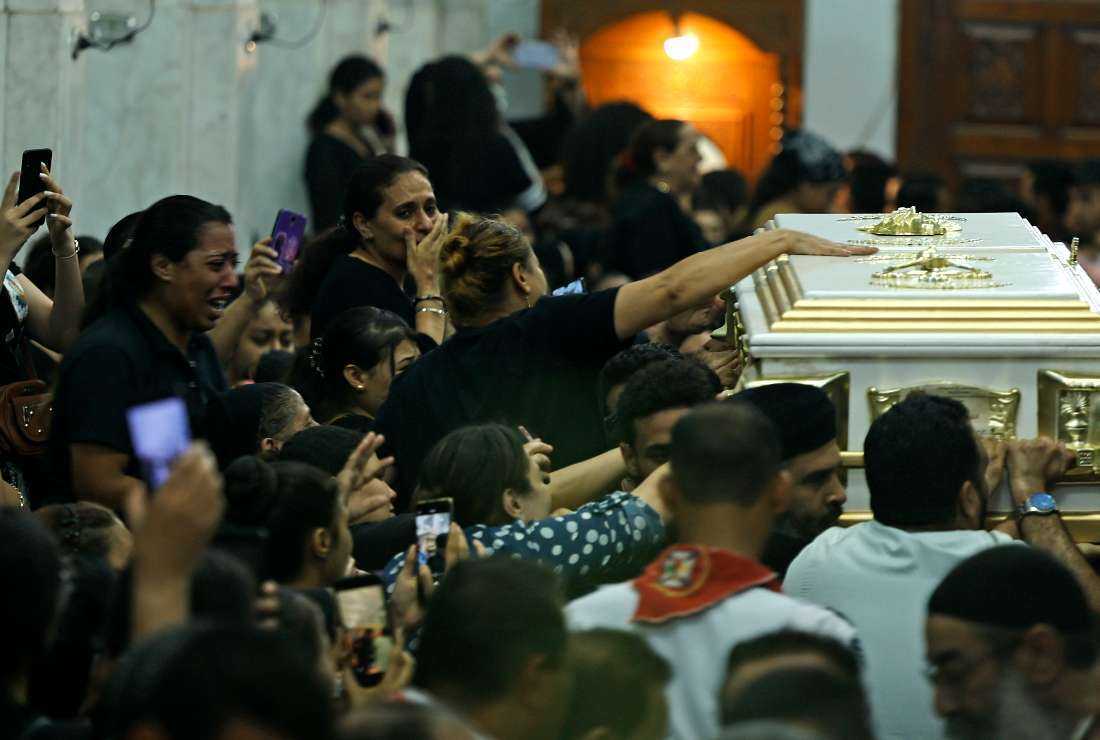 Egyptian mourners attend the funeral of victims killed in Cairo Coptic church fire, at the church of the Blessed Virgin Mary in the Giza Governorate on Aug. 14. (Photo: AFP)

Funerals were held in two Cairo churches Sunday evening for 41 victims of a fire that ripped through a Coptic Christian church during mass, forcing worshippers to jump out of windows.

The blaze, blamed on an electrical fault, hit the Abu Sifin church in densely populated Imbaba, a working-class district west of the Nile River, part of Giza governorate in greater Cairo.

Hundreds gathered to pay their respects in and around the two Giza churches where clergymen prayed for the victims, according to AFP correspondents.

Pallbearers pushed through crowds of weeping mourners who reached for the coffins, including that of a priest at the church, Father Abdel-Messih Bekhit.

The Egyptian Coptic Church and the health ministry reported 41 dead and 14 injured in the blaze before emergency services brought it under control.

Witnesses to the fire Sunday morning described people rushing into the multi-story house of worship to save those trapped, but the rescuers were soon overwhelmed by heat and deadly smoke.

Copts are the largest Christian community in the Middle East, making up at least 10 million of Egypt's 103 million Muslim-majority population.

"Everyone was carrying kids out of the building," said Ahmed Reda Baioumy, who lives next to the church. "But the fire was getting bigger and you could only go in once or you would asphyxiate."

Another witness, Sayed Tawfik, told AFP that "some threw themselves out of windows to escape the fire". He pointed to a car bearing dents "left by a person who is now lying in the hospital with a broken arm and back".

A resident of the area, Mina Masry, said emergency services were slow in responding. Ambulances took "over an hour to arrive" and fire trucks "nearly an hour, though their station is five minutes away".

"If the ambulances had come on time, they could have rescued people," Masry added.

A statement from the public prosecutor's office indicated that asphyxiation caused the deaths, as there were "no visible injuries".

The interior ministry said "forensic evidence revealed that the blaze broke out in an air-conditioning unit on the second floor of the church building" which also houses social services.

Father Farid Fahmy, of another nearby church, told AFP a short circuit caused the fire.

"The power was out and they were using a generator," he said. "When the power came back, it caused an overload."

In the morning, President Abdel Fattah al-Sisi said on his Facebook page that he had "mobilised all state services" in response. He later said he had "presented his condolences by phone" to Pope Tawadros II, the head of the Coptic Orthodox Church.

He also directed the Armed Forces Engineering Authority to "take over the reconstruction and renovation" of the church, the presidency said in a statement.

Christian communities often complain that reconstruction of churches after devastating fires is marked by long delays and bureaucratic hurdles.

The grand imam of Al-Azhar, Egypt's foremost Muslim institution, expressed his condolences for "the tragic accident" and affirmed "the readiness of Al-Azhar hospitals to receive the injured".

A statement from the office of UN Secretary-General Antonio Guterres offered his "deepest condolences" to the families of the victims.

Accidental fires are not uncommon in the sprawling megalopolis of Cairo, where millions live in informal settlements.

Baioumy, the neighbour, told AFP that firefighters were hampered by the church's location "on a very narrow street".

The Coptic minority has endured attacks and complained of discrimination in the north African country, the Arab world's most populous.

Copts have been targeted in deadly attacks by Islamist militants, particularly after Sisi overthrew former Islamist president Mohamed Morsi in 2013, with churches, schools and homes burnt down.

Copts also complain they have been left out of key state positions and they have deplored restrictive legislation for the construction and renovation of churches.

Sisi, the first Egyptian president to attend the Coptic Christmas mass every year, in February appointed the first ever Coptic judge to head the Supreme Constitutional Court, the country's highest.