Assistant parish priest from St. Joseph Catholic Church in Pathein Diocese was among 13 questioned by soldiers 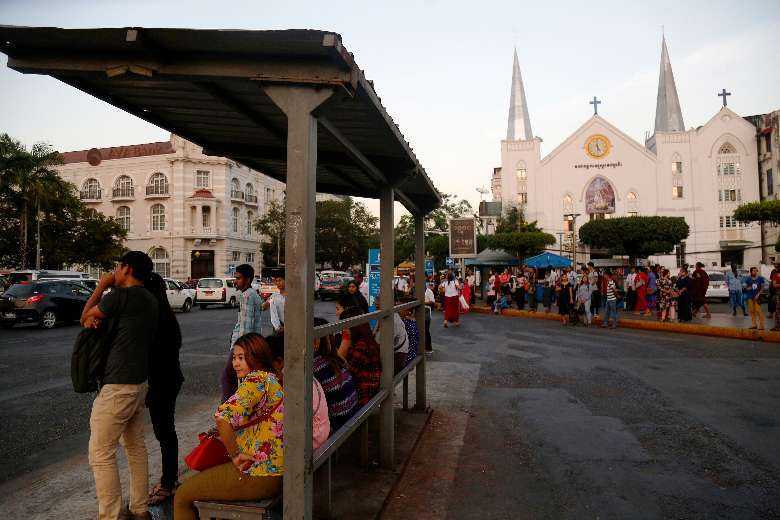 People wait at a bus stop in front of a church in Yangon, Myanmar. (Photo: AFP)

Church officials in Myanmar are in talks with authorities to ensure the release of a young priest detained by junta troops from a village in Irrawaddy Division.

The assistant parish priest was among 13 people including another priest, two seminarians and nine laypeople with some catechists who were picked up on April 10 during a raid at St. Joseph Catholic Church in Sharge village, Hinthada township, under Pathein Diocese.

The reason behind the 3am raid by dozens of junta troops, some in civilian clothes, remains unclear but all except the assistant parish priest were released the same afternoon after being questioned for several hours, said church sources.

“Church officials are trying to send an appeal letter and also talking with the concerned authorities for the release of the detained priest,” a senior clergy told UCA News.

Another church source revealed that some photographs purportedly linked with anti-coup activities were found with the young priest.

The priests, catechists and parishioners were engaged in cooking meals for Palm Sunday celebrations at the church when the soldiers raided their premises.

The latest targeting of Catholic clergy comes within a couple of days of some 100 soldiers raiding the compound of Sacred Heart Cathedral in Mandalay, where they searched every building including the archbishop’s house and clergy center for suspected hidden weapons.

Some 11 priests have been arrested since May 2021 from Banmaw, Mandalay, Hakha, Taunggyi and Pekhon on suspicions of supporting the rebel People’s Defense Force.

A diocesan priest from Pekhon Diocese was earlier stopped and threatened with death by soldiers while on his way back from Taunggyi town to his parish last October.

The junta has also specifically targeted churches and related institutions in Christian-dominated Kayah, Shan and Chin states, which have witnessed strong resistance to the military regime, mostly from young people including Christians.

A handful of churches from Catholic, Baptist and other denominations have been destroyed or attacked in Chin state in the west while at least seven Catholic churches from Kayah and a cathedral in Pekhon Diocese have been attacked with artillery shelling and airstrikes on suspicion of providing refuge to displaced people.

Christians have borne the brunt of the decades-old civil war and continue to face arbitrary arrests, killings, torture and rape at the hands of the military, which has ruled Myanmar for more than five decades.

DAVID
the world no longer has control over political criminals ,, we need a change of governments all over the world , talking is not the answer ,, action speaks louder ,,
Reply