Educating the girl child a challenge in post-Covid Asia 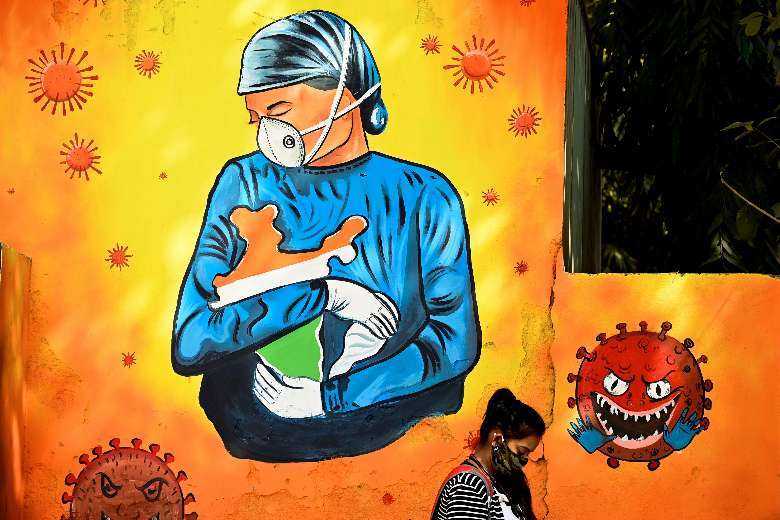 An Indian girl walks past a mural depicting a health worker during the coronavirus pandemic in New Delhi on Nov. 23, 2020. (Photo: AFP)

If girls’ education makes societies stronger, more peaceful and prosperous, then the chances of Asia achieving those goals have become more distant with the coronavirus pandemic.

Prior to the pandemic, girls’ enrollments in school had seen significant improvements in Asia. But with the pandemic, those gains have been wiped out.

UNESCO estimates that about 24 million learners, from pre-primary to university level, are at risk of not returning to school following the education disruption.  Almost half of them are found in South and West Asia besides Africa.

Asia was doing well prior to the pandemic, having brought down the number of girls out of school from 30 million to 15 million in the last two decades.

Almost all Asian countries with the exception of Pakistan and Timor-Leste had fared well by sending girls to schools. In fact, with more girls in schools, Asia had posted decreasing trends in child marriage prior to the pandemic.

With the pandemic playing spoilsport, it will be difficult to sustain the tempo. With an estimated 200,000 more girls experiencing child marriage in South Asia in 2020, the figures are expected to skyrocket as the ordeal from the pandemic is still lingering in many Asian nations.

The lack of education leads to underage marriages in several nations of this most populous continent, leading to poverty-stricken and unhealthy mothers, children, families and societies

Churches in Asian nations are proud managers of elite schools and colleges in most cities and towns. But those institutions are incapable of helping millions of village girls dropping out of schools because of poverty and adverse social situations.

The lack of education for girls pulls back societies to primitive situations, making them unable to accept the liberation that the Gospel offers. It is time the Church in Asia saw this as a major challenge to the mission on the continent.

The lack of education leads to underage marriages in several nations of this most populous continent, leading to poverty-stricken and unhealthy mothers, children, families and societies.

Indonesia’s district and regional courts witnessed a surge in underage marriage after the pandemic started. Between January and June 2020, some 24,000 applications for underage marriage were lodged in the world’s largest Muslim country.

The family planning agency in Indonesia, which has one of the highest rates of child marriage in the world according to UNICEF, could see a huge baby boom early next year due to school closures and fewer avenues for contraception.

Though the country of 270 million people has raised the legal age for wedlock from 16 to 19 for both sexes, there are loopholes that local religious courts exploit to approve underage unions.

Under Prime Minister Narendra Modi, India is mulling raising the marriage age from 18 to 21 for girls, but the move has proved difficult to implement in a country of 1.3 billion people.

A parliamentary panel report, which focused on the empowerment of women through education, observed the probability of more adolescent girls opting out of school permanently is high.

The report said that girls away from school will end up doing household tasks and providing childcare due to the economic hardships of their families.

Though the panel has recommended targeted scholarships, conditional cash transfers, provision of bicycles, access to smartphones and hostel facilities to woo girls back to school, going by India’s track record in looking after the welfare of its marginalized, these sops may remain only on paper.

In Vietnam, the legal age to wed is 18, but UNICEF said one in 10 girls is married before that age. Tying the nuptial knot early is mainly prevalent among ethnic groups in the communist country.

Asia is known for its migrant workers. But the pandemic caused job losses and many are stuck at home. When family members are hit by Covid-19, the onus of looking after patients falls on girls. So at home, care responsibilities have dramatically increased for girls who were forced to skip classes due to their ethnic minority status.

The cost of school fees was identified as a major barrier to girls’ education in Asia. With a bleak economic future awaiting their parents combined with existing attitudes that devalue girls’ education, more girls are being taken out of school forever in Asia.

University students are most affected due to the tuition costs related to their studies. Pre-primary education comes next. While Sri Lanka, Bangladesh and to a greater extent India are on track to achieve gender parity in primary education, Pakistan and Afghanistan are woefully lagging.

Those girls who will be spared the tyranny of early motherhood have already assumed the new role of child laborers. These young hands are going to do more harm than good to the existing labor market in Asia which is facing the problem of plenty as the pandemic rendered many migrant workers jobless.

This excess supply of girl laborers will further reduce the bargaining power of men and women working in unorganized sectors such as construction and garment-making.

At home, these girls become an easy target for family violence. Heightened calls to helplines were reported in Singapore, Malaysia and India after the pandemic hit. In Vietnam, domestic violence has doubled since Covid-related measures were introduced.

Education was the last resort for many Asian girls to lead a respectable and meaningful life. What they need is compassionate treatment to help them wade through the new normal.

The tiny Catholic Church in Asia, which claims to have pioneered modern education in most Asian nations, could play a vital role to change the fate of Asian girls and society itself. But that can happen only if the hierarchy becomes aware of the challenges to the mission.