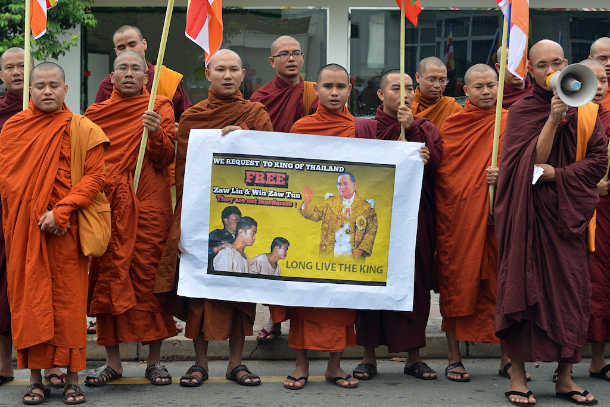 Buddhist monks from Myanmar demonstrate outside the Thai embassy in Sri Lanka's capital Colombo on Dec. 28, 2015, for the release of two compatriots sentenced to death for murdering a pair of British backpackers on Koh Tao in Thailand. The resort island is again in the news after a British tourist claimed she was raped. (Photo by Ishara Kodikara/AFP)

The British editor of a small Thailand-based online publication says she was surprised by the arrest warrant issued for her by a Koh Samui court over her website's coverage of the alleged rape of a young British woman on neighboring island Koh Tao.

"I really don't know why [they decided to come after me]," Suzanne Buchanan, editor of the Samui Times, told ucanews.com.

"Many news publications in Thailand and around the world have reported on the disproportionate incidents of tourist deaths on Koh Tao. It seems very strange to me that this time the authorities are going after the Samui Times. I think the authorities are upset with negative publicity for Koh Tao and wish to silence the small publications who report on it."

Local authorities, she added, may be "unable or unwilling to go after larger publications who can fight back, or maybe they just want to show they are taking action and feel that the smaller publications are easier to intimidate."

Police in Surat Thani have accused Buchanan of violating the country's Computer Crime Act by publishing claims by a 19-year-old British tourist who says she was drugged and raped during her recent stay on Koh Tao, which is popular with backpackers.

Local police have had another arrest warrant issued for the U.S.-based owner of a popular Facebook page who has also been reporting on the case. They say they found no evidence to indicate the tourist had been raped.

Maj. Gen. Apichart Boonsriroj, commander of police in Surat Thani province, has submitted a report saying the rape as described by the woman did not take place. Controversially, his office has breached confidentiality rules by publicly identifying the alleged victim.

Thailand's draconian cybercrime laws prescribe severe penalties for spreading false information online. If convicted, Buchanan, who is back home in the United Kingdom, could face up to five years in prison if she ever returned to Thailand.

Critics of the law say it is routinely used by officials to try and silence criticism or negative publicity.

"It's almost a reflexive reaction [on the part of some Thai officials] to want to shut up the media rather than deal with problems," said a veteran Thailand-based foreign correspondent who asked to remain anonymous for fear of having his media accreditation revoked.

Buchanan echoes that view. "I feel sorry that they have taken this action instead of investing their energy in solving the obvious problems on Koh Tao," she said.

"The latest rape is not a fake story. The girl in question cut her trip around the world short by several months, returned to the U.K., where she saw health professionals and is being taken care of at a rape crisis center."

The case has received widespread coverage in the U.K., where the woman reported it to police and provided them with what she said was DNA evidence of the crime. Her mother is reportedly planning to fly to Thailand to ask police to investigate further.

"I find it unfathomable that anybody [in Thailand] could think the Samui Times made this all up," Buchanan said.

In recent years, several foreign tourists have died under suspicious circumstances on Koh Tao, which has been dubbed "Death Island" by foreign media.

In 2014, the small island made headlines worldwide when two British backpackers, Hannah Witheridge, 23, and David Miller, 24, were found dead on a beach. They had been bludgeoned to death with a garden hoe. Forensic evidence showed Witheridge had been raped before her murder.

Two Burmese migrant workers were convicted of the murders and sentenced to death. Numerous island residents, however, have expressed doubts about whether the Burmese were indeed culpable, arguing that they might have been used as scapegoats to cover up for a well-connected local. The evidence for this hypothesis remains circumstantial.

Buchanan, who had been living in Thailand for nearly 20 years, left Samui in 2016, shortly after the conviction of the Burmese migrant workers.

"I made the decision to leave Thailand after the two Burmese men were convicted and given the death penalty," she said. "I followed this case very closely and felt very uncomfortable with the conviction, which I felt was unfair."

Buchanan says she is not planning to return to Thailand any time soon. "I used to love Thailand but felt that the [police's] handling of these cases was appalling and decided it was better for me to return to the U.K.," she said. "Staying in Thailand would have felt like I was condoning their actions."