Thailand has the highest suicide rate of ASEAN's 10 member nations and is ranked 32nd in the world. (Photo: Unsplash)

Suicides in Thailand, which have long been a leading cause of unnatural death, could increase in the wake of the severe economic downturn in the country as a result of the Covid-19 pandemic, experts have warned.

Since March 26, when a countrywide lockdown was instituted to halt the spread of the novel coronavirus, at least 38 people have tried to take their own lives because of economic hardships created by the lockdown and attendant job losses, according to a team of researchers at Chiang Mai University.

Of these 38 attempts, 28 were successful. Several other pandemic-related suicides might have gone unreported or attributed to other causes, however.

The academics have warned that suicides caused by economic hardship will likely outnumber Thais who have died of Covid-19 itself. To date, 55 locals have succumbed to the coronavirus that originated in Wuhan, China, late last year.

“While the government [has mobilized] resources to slow the spread of the virus, it fails to address [the issue of suicide] due to the restrictions,” the researchers said in a statement.

The high number of suicides in recent weeks indicates “the government’s gross failure in handling the situation,” they noted. “Some people were driven to take their own lives.”

The experts say a worsening economic situation could lead yet more locals to feel an abiding sense of hopelessness, especially among economically disadvantaged people and the urban poor.

The lockdown was partially lifted on May 3, but a full economic recovery is expected to take years, especially in the vital tourism and services sectors. In the meantime, millions of Thais have been stuck in limbo with no or little income.

A group of business owners has warned that if the country’s economic slump continues for another few months, as many as 10 million people, or a quarter of Thailand’s workforce, could be out of a job with socially devastating consequences. 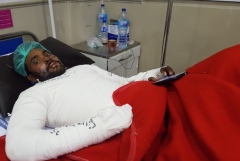 Even before the pandemic Thailand’s suicide rate was high. Suicide ranks second among the causes of unnatural death in the kingdom, behind road accidents and ahead of “intentional homicide.” Last year nearly 10,000 locals died by suicide, according to estimates by the World Health Organization (WHO).

Official Thai government figures peg the country’s suicides to a lower rate, but even according to that rate a Thai citizen commits suicide every two hours on average, or a dozen people in total every single day. The number of attempted suicides is significantly higher.

The most at-risk groups include young men between the ages of 15 and 29 as well as women in their early 50s, according to official data.

On the WHO’s recent list of 183 countries surveyed, Thailand ranks 32nd with 14.4 suicides per 100,000 people. Within ASEAN, Thailand occupies the number one spot in terms of suicide per population, followed by Singapore (with a ratio of 11.2) and Laos (with a ratio of 8.6).

The Philippines, a predominantly Catholic nation, has the grouping’s lowest rate with a ratio of 3.2.

Thailand’s suicide rate has nearly doubled since 2002. Experts have pointed to a lack of adequate mental health assistance and rampant economic hardship as two primary causes for the country’s persistently high rates of suicide.