A research paper from Ahn Seong-im discusses weddings from a Catholic, ecological, and spiritual perspective 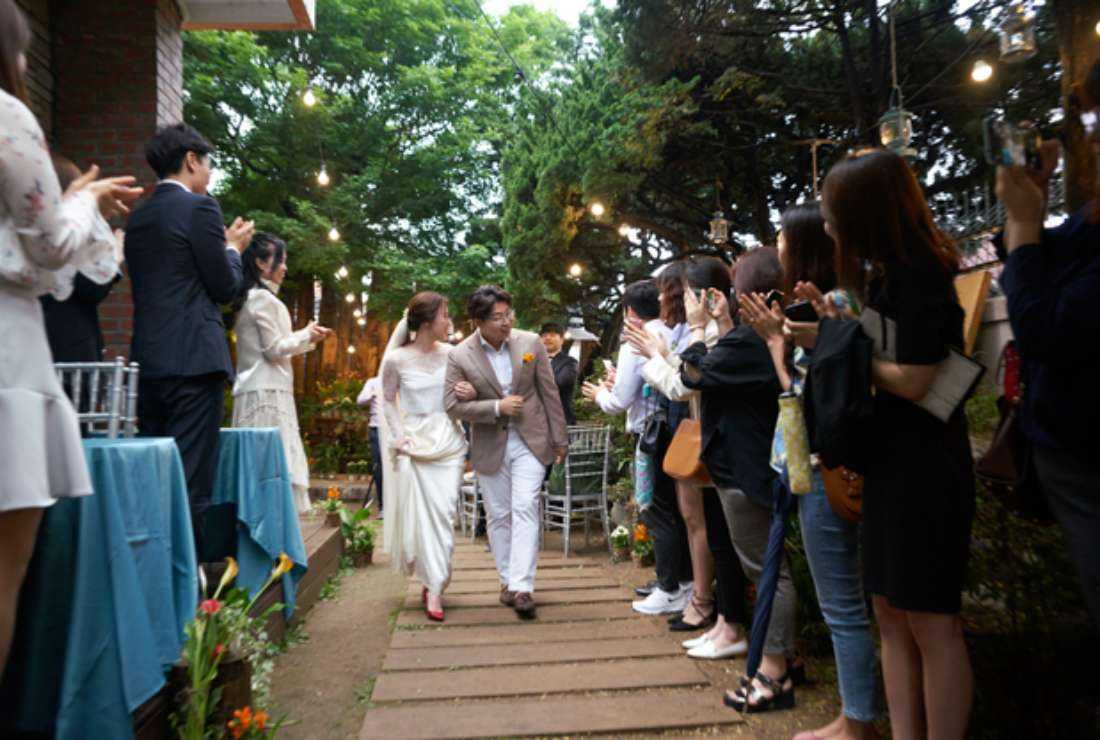 A newlywed couple is seen at the venue of an 'eco-wedding' in South Korea. (Photo: Ahn Seong-im)

A research paper inspired by Pope Francis’ landmark environmental encyclical, Laudato Si, highlighting the merits of "eco-weddings" has received an enthusiastic response from Catholics and environmental activists in South Korea.

Helena Ahn Seong-im, 47, a Catholic and a wedding consultant based in the capital Seoul, presented her master's thesis titled "A Proposal for Eco-Spiritual Eco-Weddings" at the Graduate School of Cultural Spirituality, Catholic University of Korea last month, the Catholic Times of Korea reported.

The paper, for the first time in Korea, discussed eco-weddings from a Catholic, ecological, and spiritual perspective.

“An eco-wedding is far from profitable, but I want to spread it little by little among Catholics and churches. Participation is important,” she said.

In a traditional Korean wedding setting the guest count may vary by more than 500 at a time. The wedding involves an exquisitely decorated venue, lots of flowers, traditional silk dresses, and lots of food.

An average wedding in South Korea costs nearly 46 million won (US$40,000), excluding the price of buying or renting a home, according to a 2017 survey by the Korea Consumer Agency of 2,000 married and single people.

However, there have been recent criticisms of extravagant weddings in the press and the Korean community that has pushed prospective brides and grooms to rethink the manner of their wedding.

Covid-19 has also contributed to the adoption of a "small wedding" where the guest numbers are less with a smaller venue and considerably lower expenses for the wedding.

In her paper, Ahn proposes that as an alternative to traditional wedding rituals in Korea, eco-friendly materials and the environment should be used. She also suggests avoiding the usage of air-conditioned venues, but rather using open parks and other natural facilities offered by the government.

It also proposes to avoid the use of fresh-cut flowers, which are later thrown in the garbage. A park or an open space where flowers are blooming can give a natural look and beauty to the occasion.

Another suggestion was to use small-sized potted plants as a decoration and give those to the guests when they leave as a gift. To tackle food wastage, it advises using a la carte dishes (ordering dishes separately from a menu) and simple lunch boxes.

"Catholics in various parts of the country, including Seoul and Incheon, have reportedly embraced the concept"

One of the major highlights of any wedding is what the bride and groom wear. It was proposed that choosing dresses that can be worn to the office or at other events could also help in looking after the environment.

Ahn noted that many Koreans have stepped in for a green or eco wedding by saving raw materials, energy and labor from being wasted. For example, many have started to use "handkerchief wedding invitations" instead of the traditional paper invitations.

Environmental campaigners have welcomed and promoted the concept of eco-weddings, and Catholics in various parts of the country, including Seoul and Incheon, have reportedly embraced the concept.

Ahn said the Church and environmentalists have praised her for her research paper.

Meanwhile, her wedding consultancy company based in Nonhyeon-dong of Seoul has continued to offer services to an increasing number of couples who choose to go for an eco-wedding.