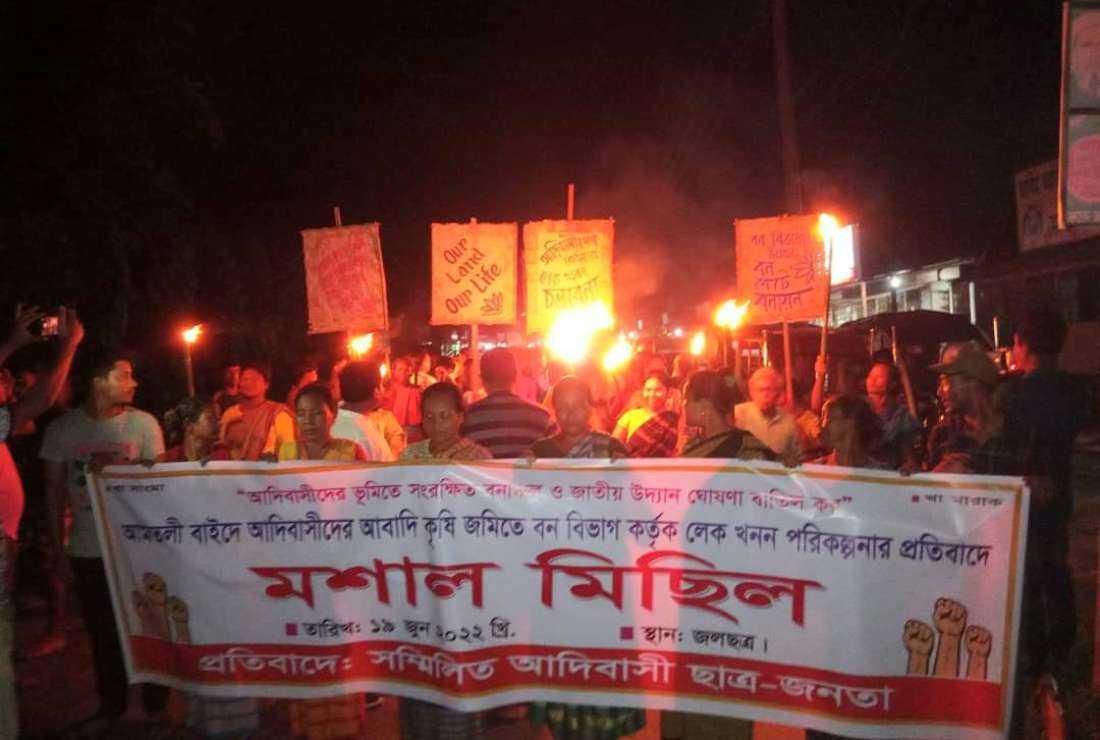 Garo villagers protest against a proposed eco-tourism project including an artificial lake, which they say threatens their lives and livelihoods in the Madhupur area of Tangail district in Bangladesh on June 19, 2022. (Photo: Alik Mree)

Thousands of Garo tribal people continue to resist government moves to evict them from their natural habitat in a forested region of northeast Bangladesh, often facing violence from forest guards and police.

In the latest case, villagers in Dokhla Amtali say, forest guards on July 7 threatened to kill them if they tried to cultivate rice paddy in fields in a forest area in Madhupur, Tangail district.

A video of the altercation between villagers and guards went viral on social media.

It showed armed forest officials barring villagers' access to the fields, which the villagers claimed were ancestral croplands.

The officials repeatedly said they won’t allow anyone in without valid land documents. At one point one threatened to fire on villagers if they defied the order.

“Shoot, if you dare, we are not afraid of being shot or of death to defend our right to the land,” the villagers shouted back.

"It is unacceptable that villagers were prevented from cultivating their land and threatened with being shot. In the past, we have seen indigenous people being shot and killed fighting for land rights"

An estimated 25,000 Garo people, mostly Christians, say their ordeal began some 60 years ago when the government declared Madhupur forest a protected zone, making them landless and illegal occupants of their own land.

Most Garo people sustain themselves by farming small plots of land and banning cultivation is forcing them to die from hunger, says Kaushala Nokrek, 35, a Garo member of St. Paul’s Catholic Church.

“Why would they want to shoot us? What are we doing wrong? We have been cultivating our ancestral land for ages and we depend on it for our livelihood. If this is taken away, how can we survive?” Nokrek told UCA News.

Nokrek said Garo people in Dokhla Amtali have about 2,000 square meters of land each and depend on farming. But they are ready to move if the government provides adequate compensation to buy their land or offers alternative land for them to relocate to.

Eugene Nokrek, a Garo Catholic and tribal rights activist said what is happening to local villagers is absolutely unacceptable.

“It is unacceptable that villagers were prevented from cultivating their land and threatened with being shot. In the past, we have seen indigenous people being shot and killed fighting for land rights. We demand a fair solution to this problem,” Nokrek told UCA News.

The activist who is the president of the Joenshahi Adivasi Development Council, a tribal rights group, noted that the current dispute dates back more than two decades when the government attempted to implement an eco-tourism project.

In 2000, the Forest Department moved to launch a World Bank-funded forest conservation and ecotourism project — the Sustainable Forest and Livelihood Project — on 1,214 hectares in Madhupur, defying opposition from tribal people.

Tension intensified in 2004 when thousands of tribal people took to the streets against the project. Police fired on protesters, leaving two dead and dozens injured. The killings sparked a backlash from media and civil society groups, forcing the government to suspend the project that year.

Activist Nokrek says the government is now reviving this project, which threatens thousands of villagers, both tribals and Muslims.

As part of the project, the Forest Department has been constructing various infrastructures including gardens with boundary walls, two-story guest houses and underground reservoirs, media reports say. An artificial lake is intended for activities for domestic and foreign tourists.

Tribal activists say the project will have serious socio-economic impacts on 25,000 indigenous people living in the area.

The revival of the suspended project comes after the Forest Department declared in 2016 that it would mark 3,700 hectares of land in Madhupur as a forest reserve, triggering protests from local tribals as well as Bengali Muslims.

Government officials said at the time the decision came from “higher authorities” and those who cannot prove ownership of land ownership must move out.

Bangladesh has some three million ethnic tribal groups living on hills and plains. Rights activists say the majority of these people live on ancestral lands without any documented proof of ownership.

Tribal people are also socially and politically neglected as they form less than one percent of 160 million people in Bangladesh. Bengali-speaking people, who consider themselves non-tribal, from 99 percent of the population.

"These people have revered nature and their land as their mother, they won’t allow any move like the proposed lake to pose threats to their existence"

For example, in 1962, when the then Pakistan government declared Madhupur forest a protected area, the land rights of thousands of tribal people living in there for generations, were ignored. Many of the land disputes in Madhupur stem from that period, Nokrek said.

Over the past decades, hundreds of local tribal people have been jailed and abused on the allegation of encroaching on the forest reserve, he said.

“Most villages where ethnic Catholics live are in the forest reserve. These people have revered nature and their land as their mother, they won’t allow any move like the proposed lake to pose threats to their existence,” Father Rebeiro told UCA News.

The priest warned that the proposed eco-tourism project would destroy the lives and livelihoods of Garo people and make them subjects of entertainment for tourists, which the Church strongly opposes.

“We are not against eco-tourism or lakes, but this should be somewhere else, not here,” he said.

Due to political sensitivities regarding the issue and the Church’s minority status, Church authorities are afraid of speaking directly against the project, the priest admitted, adding that they have sought help and support from senior Garo leaders, rights groups, and the Vatican.

“We will continue to oppose this project until it is halted because it threatens the existence of local people who have nowhere to go,” the priest added.

Apurbo Mrong, secretary of the Justice and Peace Commission in Mymensingh Diocese which covers the area, said the Church has been negotiating with the authorities to solve the issue.

“We are working on behalf of the Church to protect the rights of indigenous peoples and are trying to negotiate with higher authorities,” he told UCA News.