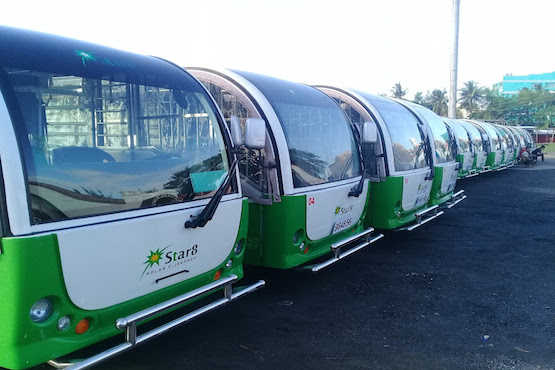 A fleet of solar-powered vehicles is being rolled out in Tacloban, which is still undergoing rehabilitation after the devastation brought about by Super Typhoon Haiyan in 2013. (Photo by Ronald Reyes)

A survivor of the deadly storm that hit the central Philippines in 2013 sits comfortably in a solar-powered vehicle that he drives in an area what was once ground zero of Super Typhoon Haiyan.

Jun Argota, 29, says he feels good driving his new jeepney around the city of Tacloban, which was devastated by what has become recognized as the world's strongest cyclone to make landfall and which left at least 6,000 people dead.

"I feel like I am helping solve the problem of climate change by driving this vehicle," says Argota, driver of one of 45 other solar-powered vehicles being rolled out in the city this month.

The government earlier announced that it will be retiring an estimated 70,000 old jeepneys in the country this month.

The move was met by resistance by drivers and transport operators.

The jeepney is the most popular means of public transport in the Philippines. It is known for colorful decorations and has become a popular symbol of Philippine culture.

In Tacloban, however, Jun Borbon of Star 8 Green Technologies, says it is high time the country promoted clean and green public utility vehicles.

The solar-powered jeepney, which uses technology that is already being implemented in countries like Singapore and Malaysia, has no engine, only a dynamo

"It can be charged through a regular electric outlet at home for four hours and it will run for 130 kilometers or eight hours," explains Borbon.

The vehicle, which can carry 22 passengers, is also equipped with a close-circuit TV camera, WiFi, and an automated billing system.

"We can combat the effects of climate change through these vehicles," says Aimee Grafil, a member of the city council.

Environmental activist Joanna Sustento says the introduction of the vehicles in the city is "a step towards change."

"It's time for us to follow the e-transport trend," says Sustento. "I look forward to the day that all vehicles on our streets will have no emissions," she adds.

The introduction of the new vehicles is important, the green activist says, "but this is just a band-aid solution."

"We cannot solve environmental problems if we do not identify, expose, or eradicate the root causes through laws and policies," Sustento says.

Educating people about the root causes of environmental problems is needed, she adds.

In the end, people who survived Haiyan "should be on the frontlines" in demanding solutions to address climate change whether by reducing the use of plastic or by transitioning to e-vehicles."