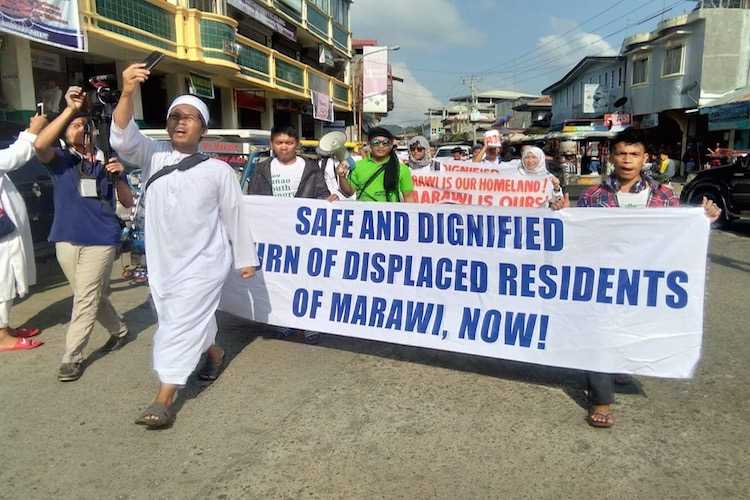 A group of Marawi residents stage a protest on the outskirts of the city on Good Friday to demand for people's consultation on the rehabilitation of their place. (Photo by Divina Suson)

Displaced residents of the southern Philippine city of Marawi were allowed back to visit what was left of their homes for the first time on Easter Sunday, five months after the city was liberated from terrorist gunmen.

The visit came after thousands of people held a protest on Good Friday to demand that they be allowed to at least see and pray inside the devastated city.

Marawi was liberated from Islamic State inspired gunmen in October following five months of clashes between government forces and the terrorist fighters who captured the city in May.

Families, many in tears, were seen digging through what remained of their homes, damaged or destroyed in the conflict, which killed about 1,200 people, mostly terrorists.

It was the first time that authorities had allowed some 7,000 residents to enter the former main battle zone.

An estimated 400,000 people, many still living in temporary shelters on the outskirts of Marawi, were affected by the conflict.

The military claimed that it has still to deal with 50 unexploded bombs from military airstrikes and explosive devices left behind by the gunmen.

The protesters brought with them prayer mats, identification cards, and placards demanding the immediate rehabilitation of the city and an investigation into the crisis.

Jamalodin Basman Mohammad, a spokesman of the group, said they only wanted to hold Friday prayers for those who died during the conflict.

Sultan Abdul Hamidullah Atar, one of the rally organizers, said they the protest also aimed to express their sentiments over the treatment of displaced residents.

He said the government is giving "false hopes and false expectations" to people. "Most feel that they have been betrayed over the past months," said Atar.

Atar said that while visitors were allowed into the city, residents up to the Good Friday protest had no chance to visit their homes.

"Did this not violate the people's rights to return to their respective homes?" he said. "The call to return was not a privilege but a right," Atar added.

Last week, Cardinal Luis Antonio Tagle of Manila issued an appeal to donate funds for the rehabilitation of the predominantly Muslim city.

Father Reginald Malicdem, rector of the Manila Cathedral, said that money raised by churches in the Philippine capital during the Lenten season will be donated to victims of calamities.

"This is a concrete way of doing a good deed and showing our love to our fellow man," said the priest.

Authorities announced that for a month starting April 1 residents will be allowed to visit to collect whatever is left from their homes before the rehabilitation of the city starts in May.

The Philippine military earlier identified at least 24 villages in the city center as "off limits due to security issues."

The government's social welfare department said that out of the 28,219 displaced individuals who were allowed to go back to their homes since the end of the conflict, only 20,668 had gone back.

"It is high time residents see their homes, salvage what is left of their belongings, and rebuild their houses," said Aida Ibrahim, coordinator of Tindeg Ranao, an organization of displaced families.

Another organization of residents has been protesting a reported government plan to establish a military camp in the city.

"Plans have been made without our participation," read a statement released by the group Ranaw Multi-Sectoral Movement, which claims that people have been left out of the planning of the rebuilding of Marawi.

The proposed rehabilitation of the city is "not merely the sum of its buildings" and "not merely an occasion for economic gain" as the city "symbolizes its people," the group added.