A diocesan office of Caritas Pakistan has distributed ration packs among 100 Christian families forcefully evicted under an anti-encroachment drive.

Earlier this month, the houses of 450 Catholic families were destroyed in Hyderabad and Karachi cities of Sindh province.

The decision to remove encroachments and clean up pollution and sludge from water drains was taken last August in the aftermath of severe urban flooding caused by record rainfall.

“The food and nutrition baskets will help our people celebrate the upcoming feast of Easter. It is sad that instead of focusing on charity, fasting and prayers in Holy Week, they are looking for shelter with their relatives or surviving in partially damaged houses,” he told UCA News.

“St. Francis Xavier Catholic Church and a Seventh-day Adventist church will be demolished as per government plans. Our volunteers from disaster management committees washed away the sludge and mud from the Catholic church and streets after the flooding of the nearby Gujjar nullah (drain).

“Christians living near this nullah spent this Palm Sunday protesting against the bulldozers and cranes advancing on their houses. Prayers were not held in these churches. They are unsure about Easter as well.”

According to Zahid Farooq of the Urban Resource Centre, the plan for cleaning and broadening storm-water drains includes the destruction of 14,000 homes and 3,000 shops.

“Even in times of war, there are breaks allowed for celebrating religious festivals. Many of the affected here are also Christians, and Good Friday and Easter are just around the corner. We urge the city government to at least stop the operation during those religious holidays to allow these people to celebrate their festivals in peace,” he said. 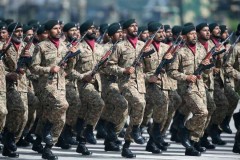 “There is a need to provide immediate assistance to poor households. We can’t imagine losing a house while trying to survive the deadly pandemic. But this is what’s happening to the poor households in Sindh. Caritas Pakistan is reviewing the situation and diocesan units along with volunteers are on the ground to facilitate the poor. We are planning to support the affected families in this difficult time,” he said.