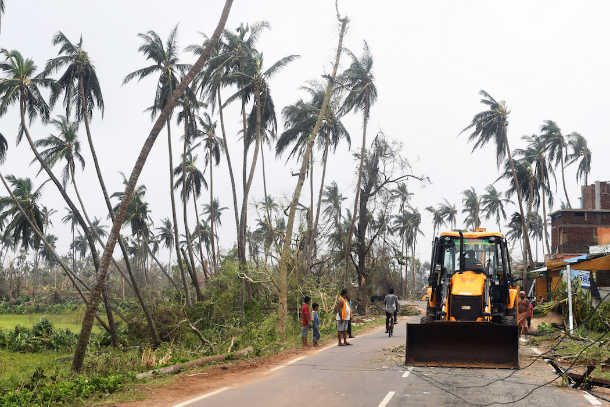 Earth-moving equipment clears a road in Puri on May 5. Cyclone Fani, one of the biggest to hit India in years, tore into Odisha on May 3, leaving a trail of devastation across the coastal state of 46 million people before swinging towards Bangladesh. (Photo by Dibyangshu Sarkar/AFP)

A powerful cyclone ripped through eastern India and sideswiped Bangladesh over the weekend, leaving a trail of destruction and death. More than 30 people were killed but the death toll would have been much worse if large numbers of people had not been evacuated in advance.

Cyclone Fani killed at least 29 people in India — mostly in the state of Odisha — and at least five are reported dead from the storm in neighboring Bangladesh.

The casualties from the storm were relatively low thanks to early warnings and efforts by authorities in both countries.

Ahead of the cyclone’s landfall on May 3, Indian authorities managed to move a million people from over 10,000 villages to safer areas.

State and federal agencies, he said, did an excellent job in preparing the population for the cyclone. The evacuations “reduced the death toll significantly,” he said.

Archbishop Barwa said it was the worst cyclone to hit the area in two decades and he described to ucanews.com the destruction it left behind.

“It has blown away everything including thatched houses, trees, electric polls and telecommunication networks,” he said.

State Chief Secretary A.P. Padhi told media on May 5 that 21 of the 29 deaths were reported from Puri, which the archdiocese covers. National Disaster Response Force personnel at work in West Bengal's Hirapur after Cyclone Fani uprooted trees and triggered rains as it entered India's West Bengal post midnight on May 4. It made landfall on neighboring Odisha on May 3. (Photo from IANS)

Archdiocesan spokesman Father Purushottam Nayak said many parish churches and church-run institutions, such as schools and convents, have been seriously damaged.

He said the archbishop’s house and a convent in state capital Bhubaneswar, some 60 kilometers north of Puri coast, have also been damaged.

State officials told media that a massive relief effort is underway and that teams of emergency workers are restoring basic facilities that have been knocked out such as electricity, water supply and mobile phone connectivity.

“We have been living in the dark since May 3. We have no electricity, proper drinking water or other basic facilities,” Archbishop Barwa said on May 6.

The Divine Word prelate said archdiocesan staff “are unable to contact our parishes, religious houses because all telecommunication lines have been destroyed.”

“I cannot even send people to affected areas because all road and rail traffic is disrupted,” he said.

Caritas India is preparing to assist with rebuilding efforts. A Caritas official told ucanews.com they are collecting data so as to formulate a plan of action.

Besides the deaths of five people, more than 170 cattle were killed while some 155,662 acres of cropland have been lost, according to Bangladesh’s Ministry of Disaster Management and Relief bulletin on May 5.

“Many people have lost their homes as the storm smashed river embankments and the flooding then inundated their villages,” Malakar told ucanews.com.

Kallayni Mondol, a member of a local government unit at Laudob in neighboring Khulna district, had a similar story. “The storm has not only destroyed houses but also livelihoods,” she told ucanews.com. Villagers bolster a river embankment at Shyamnagar of southern Satkhira district on May 3, just hours before Cyclone Fani hit Bangladesh. (Photo by ucanews.com)

Catholic charity Caritas Khulna has been assisting those affected by the storm, said Jibon D. Das, the regional director.

“Caritas volunteers warned and led people to 245 cyclone shelters set up by Caritas before the storm struck,” he said.

“We have distributed dry food to some 600 families. An assessment of damages is being done, and rehabilitation projects will start once the reporting is complete and funding received.”

Das said the government should construct strong river embankments and assist people get better housing in coastal regions so that they don’t suffer so much from such calamities.

“When natural disasters strike, everything falls apart because the embankments are not strong enough,” he said.

Shah Kamal, senior secretary of the Disaster Management and Relief Ministry, said the government will support construction of better houses and embankments.

“We have a plan to construct 12,000 brick houses in coastal areas by June this year and 125,000 more within the next five years. These houses cannot be destroyed in natural disasters,” Shah Kamal told ucanews.com.

“We will also repair and reconstruct dams and embankments, making them strong enough so that they don’t get destroyed by storms or tidal surges,” he said.