Duterte's policies unmask him as enemy of the poor 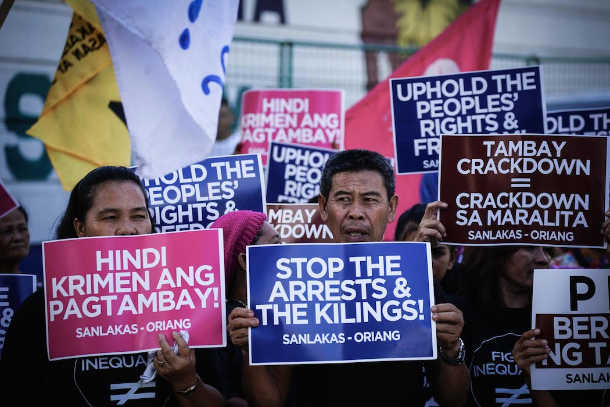 A group of urban poor settlers stage a demonstration outside the national police headquarters in Manila in this June 28 photo to protest a wave of arrests and killings in recent months. (Photo by Jire Carreon)

More than 55,000 homes lie abandoned, rotting in relocation sites for informal settlers of the Philippines' capital. Billions of pesos were spent to build these homes but beneficiaries have shied away due to dangerously shoddy construction.

Members of the urban poor group Kadamay launched a campaign in June to occupy the vacant houses. They have already built a thriving community north of Manila following a campaign last year that took the government by surprise.

Nobody else wants to live in the tenements. Instead of negotiating, President Rodrigo Duterte ordered elite policemen to guard the empty structures, telling officers to "shoot" the activists.

Duterte got 16 million votes during the 2016 elections, mostly from the poor.

Voters angered at decades of neglect and pro-rich governance could not resist his promises: a crackdown against crime groups that prey on the young, an end to labor-only contracting that has withheld social benefits and security of tenure for millions of workers, the completion of the government's agrarian reform program, homes for the homeless, the safe return home for indigenous tribes displaced by a military working for mining and plantation interests.

As Duterte prepares for his third year in power, critics say he has delivered on only one main promise. The president, who built his fame on the pacification of a southern city via a bloody pogrom against criminal suspects, has brought his bloody act to the national stage.

Police have shot dead more than 4,000 mostly poor drug suspects. Several thousand more have been slain by assassins whom police claim are members of crime syndicates, although witnesses to several murders have tagged law enforcers.

Duterte's drug war delivered on his threat of bloodshed. It is a big zero in terms of solution. The president promised an end to drugs in six months, then one year, and then two. Now he says it will take him all six years to rid the country of the problem.

Critics scoff at his words. Few heads of cartels have been arrested. Big drug lords have walked from jail. Hundreds of millions of dollars worth of illegal drugs have entered the country. One scandal had customs officials facilitating a huge shipment of illegal drugs from China.

Duterte, who routinely threatens to kill corrupt government officials, promoted those responsible for the smuggling attempt.

There is no sense or reason to Duterte's bloody campaign. Children have died, millions rounded up with no room to protest their innocence. He has drastically trimmed the budget for drug rehabilitation.

Duterte's promise to labor groups now hounds him. At least 30,000 workers protested on Labor Day this year, the first time in decades rival organizations have united. They rejected an executive order that only touches the problem, allowing many legal loopholes to remain.

Last month, strikes broke out at a dozen big national and multinational firms, all to end labor-only contracting. North of Manila, where hundreds of workers barricaded the gates of the country's biggest manufacturer of condiments and spices, police attacked, gravely injuring seven people and arresting more than 20 others.

There has been silence from the man in power.

The Ibon Foundation think tank reports that eight of 10 families earn less than US$526 per month. Government economists acknowledge that a family in the capital region needs at least US$843 monthly to avoid the poverty trap.

Many of the thousands of workers now at the barricades earn between US$7 and US$8 daily, well below the US$9.5 minimum wage.

The poor are exempted from paying income tax. But a tax reform program that benefits the richest burdens the poor with indirect taxes from an expanded value-tax list and higher excise taxes on petroleum products.

As a result, inflation is at a five-year high, with little end in sight. Even legislators have called for a review of the tax-reform program, but Duterte's economic managers refused to budge. To defray the additional cost, they have given the poorest of the poor a US$3.75 monthly subsidy, not enough to cover a week's increase in the price of rice.

Duterte has reneged on his pledge to protect indigenous peoples. He now threatens to bomb their schools for churning out alleged militant youths. Displeased at indigenous opposition to plantation and mine operations, he has vowed to open up their lands and choose investors.

After bombing the Islamic city of Marawi to smithereens, Duterte has shut out the local community from decision-making in the US$1.3-billion rehabilitation program.

Martial law in Mindanao allows shortcuts in the budget process. The military-led Task Force Rise Marawi has little oversight as it negotiates with big Chinese state firms and Malaysian investors for reconstruction.

Thousands of the 400,000 displaced residents remain in temporary shelters outside of Marawi, their children reluctant to enroll in schools where they brave discrimination against Muslims.

Faced with an inability to deal with economic problems and growing outrage, Duterte has fallen back on his solution comfort zone: draconian crackdowns.

A young man died following a round up of poor men for the crime of idling on streets, a regular activity for Filipinos who live in urban poor communities, sometimes in multi-family homes with poor ventilation.

Going around shirtless in Manila's sweltering monsoon season has suddenly become a crime.

Responding to human rights groups' concern, Duterte snapped back with his favorite line: Nobody tells him what to do.

The police aren't going around seeking shirtless men in exclusive villages. The focus of the crackdown is once again the poor. A Kadamay leader believes it is a ploy, framed as another anti-crime policy, to prevent the urban poor from organizing.

The latest outrage is a proposal by the Philippine Drug Enforcement Agency for mandatory drug tests among elementary school pupils and teachers. It is a ridiculous solution that places the onus of blame on children to cover up the failure of state mayhem to resolve crime.

As the poor reel from killings and growing hunger and poverty, the only solution Duterte has for them is more misery.