A leading Philippine bishop released a video on social media earlier this week in response to tirades by President Rodrigo Duterte against the Catholic Church and its leaders.

In the video post, which became unavailable on March 7, Archbishop Socrates Villegas of Lingayen-Dagupan called on Catholics not to betray God and deny their faith by their vote.

Filipinos go to the polls on May 13 for midterm elections for which Duterte has been vigorously campaigning on behalf of his allies running for the Senate.

The video, which lasts about eight minutes, intersperses clips from various Duterte speeches against church leaders and readings by the prelate of Bible passages.

After one clip where the president threatened church leaders, Archbishop Villegas read a passage that says: "Judas would you betray the son of man with a kiss?"

When Duterte said "Who is this stupid God?" and laughed off the death of Jesus on the cross, the prelate read from the Book of Psalms, Chapter 14, Verse 1: "The fool says in his heart, 'There is no God.' They are corrupt, their deeds are vile; there is no one who does good."

The video, which was released on Shrove Tuesday on March 5, ended with movie clips of the scourging and crucifixion of Jesus.

Archbishop Villegas, former president of the bishops' conference, first caught the ire of Duterte following his criticism of the president's statement cursing Pope Francis for causing a traffic jam in Manila during his 2015 visit.

"Vulgarity is corruption. When we find vulgarity funny, we have really become beastly and barbaric as a people," the prelate said in December 2015. 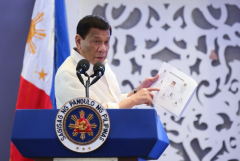 After Duterte's election in 2016, Archbishop Villegas continued his criticism of the president's policies, especially the anti-narcotics campaign that has reportedly killed thousands of suspected drug users and dealers.

In a statement released in January, Catholic bishops also criticized the alleged human rights abuses of those implementing the anti-narcotics campaign.

Bishop Pablo Virgilio David of Kalookan who has also been vocal against the Duterte administration has recently claimed that he has been receiving death threats.

Duterte later warned against hurting priests and bishops, saying that "they had nothing to do with us."

"Do not do it. Do not try to do it. Religious [leaders] had nothing to do with the vagaries of life. Lay off! Stop threatening them or you will have to face me," Duterte said in a speech last month.