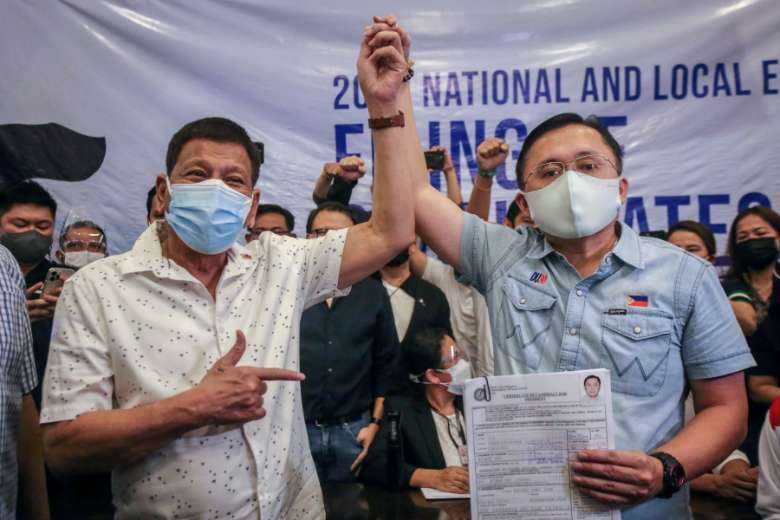 Philippine President Rodrigo Duterte (left) raises the hand of senator Christopher 'Bong' Go after he filed his candidacy for president in the 2022 elections at the election commission in Manila on Nov. 13. (Photo: AFP)

Philippine President Rodrigo Duterte's chosen successor today announced his withdrawal from the 2022 presidential race, saying it was "not yet my time".

Senator Christopher "Bong" Go, a close aide to the president, entered the contest for the country's highest office two days before the Nov. 15 deadline after previously registering for the vice presidential race.

His sudden exit narrows the field of candidates vying to replace Duterte, who is constitutionally barred from seeking a second six-year term. He is running for the Senate.

"My family doesn't want it either, so I thought maybe this is not yet my time," Go told reporters.

Go said his decision to withdraw was also to avoid causing more problems for Duterte, who he professed to love "more than as a father".

"I remain loyal to him and I promise to be with him forever," Go said. "In the past few days I realised that my heart and my mind are contradicting my own actions."

Most analysts had given Go little chance of success in the May election, though he was the most likely candidate to protect Duterte from criminal charges in the Philippines and an International Criminal Court investigation into his deadly drug war.

"From the very start he has launched a lukewarm campaign and it's very obvious that he was just thrust into that job by President Duterte," said Jean Franco, a political science professor at the University of the Philippines.

The son and namesake of former dictator Ferdinand Marcos has a commanding lead in the race, according to a recent survey by respected polling outfit Social Weather Stations.

Duterte has been an ally of the controversial Marcos family, which had gone into exile in the United States after the patriarch's humiliating downfall in 1986.

But recently Duterte has been publicly critical of Marcos Jr, describing him as a "weak leader ... saddled with baggage".

Sara Duterte, his daughter, had been widely expected to run for president. But she has filed her candidacy for vice president, a position which holds very little power, and formed an alliance with Marcos Jr.

Go's exit from the "tight election race" could strengthen the "political force" of Marcos Jr and Sara, said Franco. But she doubted that Duterte would endorse Marcos Jr for his job.

Go's decision also comes after a tumultuous week when many of the leading presidential and vice presidential candidates took drug tests after Duterte accused an unnamed candidate of snorting cocaine.