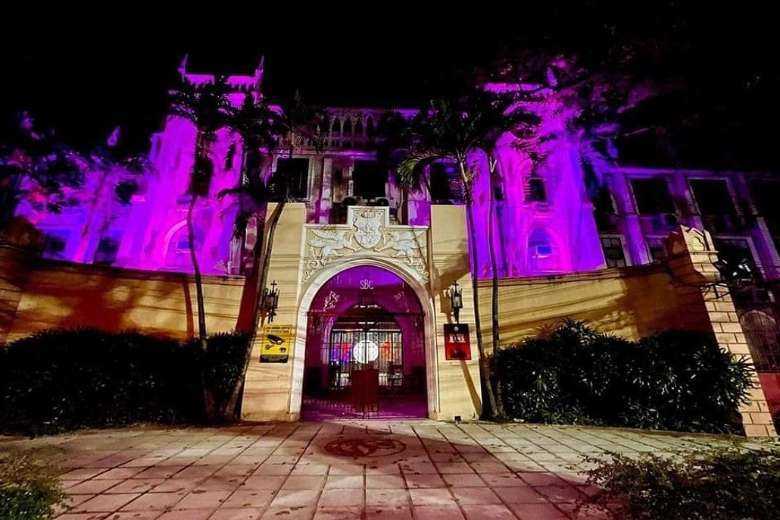 A Catholic university in the Philippines has shown its support for presidential candidate Leni Robredo by lighting its buildings in pink.

Vice President Robredo is running for president in the 2022 election and is expected to fight toe to toe with Duterte’s soon-to-be-anointed candidate.

Duterte’s ally and friend, lawmaker Christopher “Bong” Go, withdrew his candidacy citing his unpreparedness to run as the nation’s leader.

The Benedictine fathers said Robredo exemplified their motto — prayer and work — that made her deserving as the country’s next president.

“The San Beda community is ONE in support of VP Leni’s presidential bid, believing that she embodies the Benedictine ideals of pax ora et labora [peace, prayer and work] and the genuine servant-leadership qualities that the Filipino nation is yearning for, especially during this troubled time,” the university’s vice president for administration, Father Aeldred Nilo, said on Facebook.

Finally, all this time, I thought the monks and the administrators were isolated from sociopolitical events. Now they have spoken

This is the first time the Benedictine-run university has shown a definite political posture against Duterte after giving him an award for being the first graduate of the university to become president of the country.

Alumni of the university showed enthusiasm after learning the news that their alma mater had supported a well-known Duterte critic.

“This is one of my proudest moments as a graduate of San Beda. Finally, all this time, I thought the monks and the administrators were isolated from sociopolitical events. Now they have spoken. I am a proud Bedan because my school has taken a stance in politics — and it is for truth and justice,” Marjorie Torrecampo said in a Facebook post.

Torrecampo recalled the times when the university was labeled conservative for not meddling in any political issue.

“Before we thought San Beda didn’t care about politics. In fact, many of Duterte’s fellow alumni from the university were appointed by him in government and in the court,” Torrecampo said.

“But now the tide is different. I am so proud to hear this news. Hail to our alma mater for standing up for truth and justice.”

Pink has been used by Robredo supporters to symbolize change in leadership in the Philippines.

The Society of Divine Word has also filled its formation house with pink lanterns made by families of the victims of Duterte’s war on drugs.

Parishioners said they felt secure that clergymen were reminding them of what good leadership meant.

“They [priests] don’t need to name names. Pink symbolizes a corruption-free country. Thank you, dear Fathers, for speaking and telling us the qualities we should be looking for in our next set of leaders,” Manila parishioner Glen Virgie Tanase told UCA News.