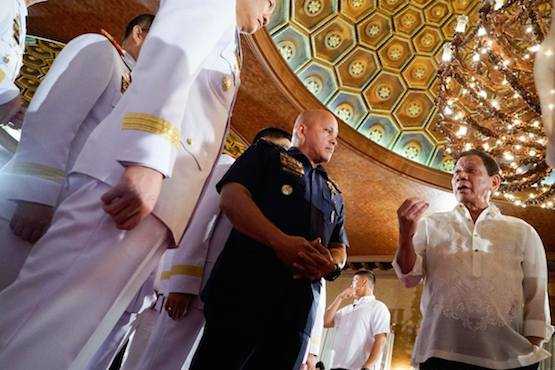 Philippine President Rodrigo Duterte on Aug. 31 pledged to carry on with his war against illegal drugs despite telling soldiers it can't be won.

"An eye for an eye and a tooth for a tooth. That's the basic law of a jungle," he said at anniversary rites of a government vocational education program.

He also dismissed the Western school of restorative justice, saying most convicts return to their old ways.

Prison inmates, Duterte said, "have lost the existence, the essence or existence of a productive person."

Being in jail also turns them to "latent homosexuals" with an "aberration of the mind," said the president who is known for shocking remarks.

On Aug. 25, Duterte told soldiers fighting in a southern Philippines city linked to the illegal drugs trade that lack of state resources make his campaign "unwinnable."

"I promised that I will do away with shabu [methamphetamine]. Now I know it won't be fulfilled, that this really will not end," Duterte said during a visit to Marawi City, where fighting with IS-inspired rebels has exceeded the 100-day mark.

Duterte has linked the rise of extremism in Marawi to local politicians who are also drug lords.

"We do not have the equipment" to monitor the entire coastlines, he told military medics in Davao City.

Duterte, who once promised to end the narcotics trade in six months, still promised to expand his drug war. He also attacked United Nations special rapporteur on extrajudicial executions, Agnes Callamard, for warning about the human cost of his campaign.

Critics have accused Duterte's drug war of killing 12,000 Filipinos. The police say their operations only account for a quarter, blaming vigilantes, drug gangs and assorted criminals for the rest.