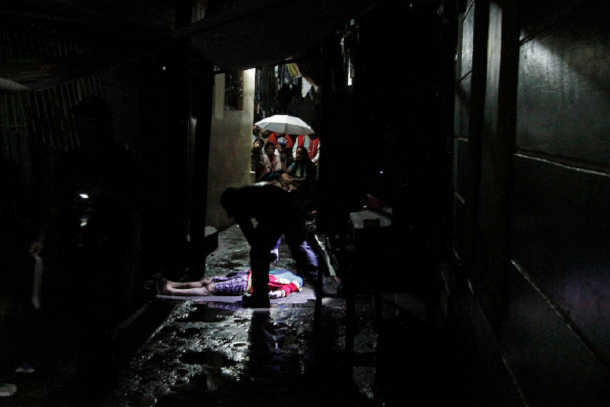 A victim of the Philippine drug war lies dead in an ally in the Manila suburb of Navotas. (Photo: Vincent Go)

A leading rights group has called on the Philippine government to review its “murderous approach” to the country’s drug problem.

Amnesty International was responding to Philippine Vice President Leni Robredo’s call for the government to change its anti-drug strategy, including a halt to violent police operations.

“This is yet more proof that the Duterte administration should address the problem through drug rehabilitation programs rooted in communities, not through a brutal policy of extrajudicial killings.

“Robredo’s assessment gives credence to what Amnesty International and others have said time and again: the government’s ‘war on drugs’ is a war on the poor, marked by human rights violations and rampant impunity for the police and other high-ranking officials.

“Another approach is possible, one based on respect for human rights, human life and human dignity, which addresses the social conditions that give rise to illegal drug use and trade.

“President Duterte must end Oplan Tokhang — his violent drug war policy — and initiate credible and independent investigations into past deadly operations, to obtain justice for countless victims of extrajudicial killings over the last four years.”

On Jan. 6, Vice President Robredo revealed her office’s findings during her 18-day stint as co-chair of the Inter-agency Committee on Anti-illegal Drugs.

She said the government has only been going after small-time drug pushers and that treatment and rehabilitation programs are inadequate. She called on the government to bring proceedings against high-value targets and improve its collection and interpretation of drug-related data.

Robredo was appointed to the committee on Nov. 6, 2019. In her short stint she demanded transparency and access to documents and intelligence reports. She also called on the government to address the policy of abusive drug watchlists and recommended the adoption of a health-based approach.

Thousands of people have been killed in a wave of state-sanctioned violence since the start of Duterte’s presidency in 2016.