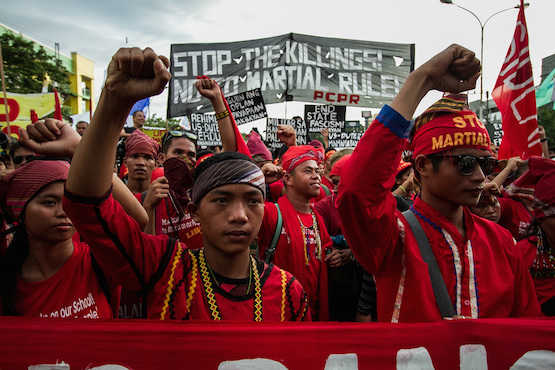 Tribal people from Mindanao join protest rallies in Manila on July 24 during the State of the Nation Address of President Rodrigo Duterte. (Photo by Mark Saludes)

Organizations working for children’s rights have denounced a threat by President Rodrigo Duterte to bomb tribal schools in the southern Philippines for allegedly preaching "subversive ideas."

In a media briefing this week, the president urged tribal people to leave the schools. "I will bomb them," said Duterte, adding that the schools are "teaching subversion [and] communism."

"I will really bomb all of them because you’re operating illegally and you're teaching children to rebel against the government," the president said.

The Rural Missionaries of the Philippines, an organization of Catholic religious missionaries that built some of the schools said the president’s statement "definitely have an implication on tribal schools."

Aileen Villarosa, the organization’s advocacy coordinator, said their schools are already under attack "because of these accusations."

"What aggravates the situation is [Duterte's] statement that he takes responsibility for all the actions of state forces," said Villarosa.

"What could be worse than what can be taken as an open command from the chief executive with sheer impunity on the genocide of our indigenous people?" said Bonganay.

He said Duterte's statement "added salt to the wounds" of tribal people, especially children whose education has been disrupted by military operations in Mindanao.

Nardy Sabino, secretary-general of the Promotion of Church People’s Response, denounced the president’s statement as "reckless and irresponsible."

In 2015, three tribal leaders, including the head of a tribal school in the province of Surigao del Sur, were killed by military-backed militiamen for allegedly supporting communist insurgents.

In a statement on July 26, Human Rights Watch urged the Philippines to "sign a safe schools declaration, not threaten students."

Carlos Conde, the organization’s researcher for Asia, said that by calling for an attack on schools, Duterte is directing the military to commit "war crimes."

"International humanitarian law, the laws of war, prohibits attacks on schools and other civilian structures unless they are being used for military purposes," said Conde.

"Deliberately attacking civilians, including students and teachers, is also a war crime," he added.

According to rights group Karapatan, a total of 21 tribal people have been killed while Duterte has been in power.