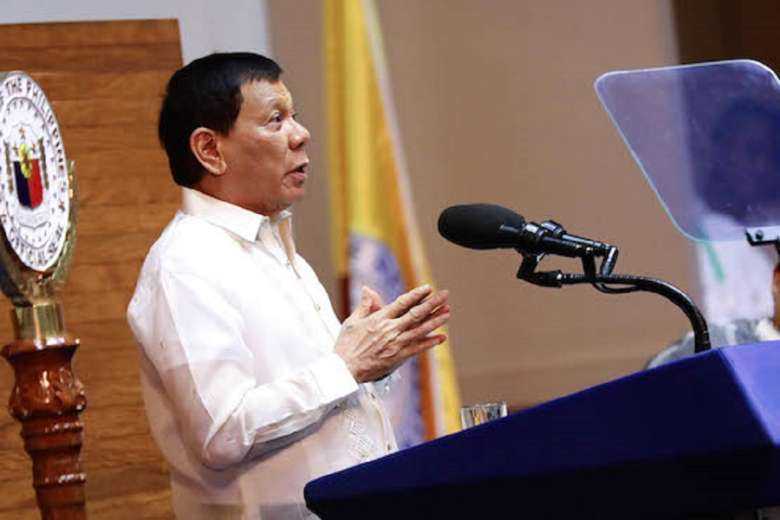 Philippine President Rodrigo Duterte defends his war on drugs during his State of the Nation Address on July 26. (Photo: Richard Madelo)

Philippine President Rodrigo Duterte used his last State of the Nation Address to hail his five-year drug war that has allegedly killed thousands of people, adding that there was still a long way to go.

Duterte steps down as president next year when his single six-year term of office ends.

During his nearly three-hour address in the House of Representatives on July 26 to report on the status of the country and unveil the government's agenda for the coming year, the 76-year-old president remained defiant over his controversial drug war policy, saying it would continue.

"We still have a long way in our fight against the proliferation of drugs," he said.

He said drug dealers were “slow” killers of the country and in an apparent swipe at the International Criminal Court (ICC) he said he would kill anyone that destroys the Philippine nation.

The former chief prosecutor of the ICC last month called for a formal probe into Duterte’s war on drugs.

Our unyielding campaign has led to the surrender of millions of drug dependents and the neutralization, capture and prosecution of drug figures

Duterte defended his drug war, saying it had been successful and brought peace to communities.

“Our unyielding campaign has led to the surrender of millions of drug dependents and the neutralization, capture and prosecution of drug figures,” he said.

Rights groups say police have often killed drug suspects illegally, while unknown assassins have claimed the lives of many other after being encouraged by Duterte.

The president taunted the ICC again by ordering the armed forces to go after and kill suspected communists .

“If you see them walking around, kindly shoot them dead, and I will be happy. Anyway, you’re only charged in the ICC together with me, so what is the problem of adding another one, another idiot Filipino who has caused great damage to our country?” Duterte said.

“[He has] proven unworthy. Whatever he said in his last speech, politics could just not be about power, be it brazen or benign. There is never a substitute for steadfast virtue and humanness in politics,” Father Pilario said in a Facebook post.