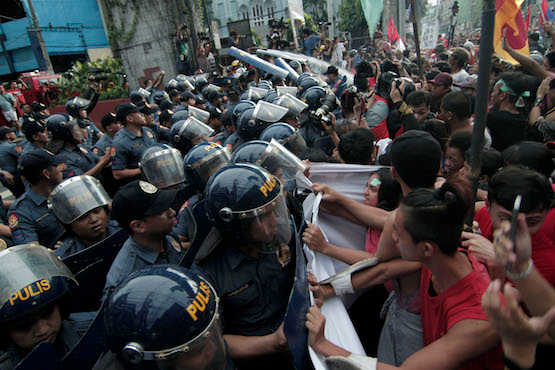 Protesters clash with police at a roadblock to the Malacanang presidential palace in Manila on Nov. 30. (Photo by Vincent Go)

A rally by supporters of President Rodrigo Duterte to push for the declaration of a “revolutionary government” fizzled out on Nov 30 as a former cabinet secretary slammed growing tyranny in the Philippines.

But organizers of the revolutionary government rally managed to muster only 3,000 participants, way short of their 100,000 target during the national holiday for Andres Bonifacio, a leader in the fight against Spanish colonizers.

Duterte’s supporters came in red shirts with uniform banners and were provided food from vans with the logo “Duterte’s Kitchen,” an aid program by his party, the PDP-Laban.

They demanded an immediate change to the constitution, which the president claims hampers the drive to root out corruption and crime. They also called on Duterte to wrest legislative power from Congress.

Waves of protesters in the thousands, meanwhile, vowed to fight Duterte’s expressed goal of doing away with the current constitution to fast track what he calls a fight against corruption, criminals and alleged terrorists and destabilizers.

Judy Taguiwalo, a former social welfare secretary under Duterte, slammed the president’s “attempts to impose dictatorship” at one of the protests.

“Duterte’s crackdown on civil liberties, the thousands of murders by police, the attacks on activists, his increasing backing for the oligarchy and reneging from progressive pledges to peasants, labor and other sectors are sources of discontent,” Taguiwalo told ucanews.com.

Police have reportedly killed around 4,000 suspects in Duterte’s crackdown on drug addicts and dealers and almost double that number have died in what police call attacks by vigilantes. More than a hundred activists have also died since Duterte assumed power and over 150 have been arrested and jailed.

Duterte, irked by criticism over mounting human rights violations, has threatened a crackdown on destabilizers, including legal activist groups and opposition political parties.