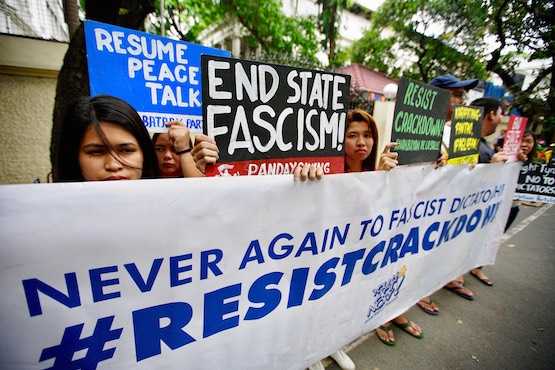 Students hold a rally outside the Justice Department building in Manila on March 12 to protest against the government's listing of at least 600 people who it accuses of being linked to the communist underground movement. (Photo by Jire Carreon)

Church and human rights groups in the Philippines have condemned the "red tagging" of at least 600 activists listed by the government as communist rebels.

"Red-tagging" or accusing people of being communist has become a common practice of the military to harass perceived critics of the government.

Among those on the list is Victoria Tauli-Corpuz, special rapporteur on the rights of indigenous peoples at the United Nations.

Tauli-Corpuz, a known advocate for the rights of Philippine tribal people, denied the allegation, calling the list "baseless, malicious, and irresponsible."

The Department of Justice submitted the 55-page list before a Manila court last month for the processing of arrest warrants and filing of cases.

President Rodrigo Duterte earlier labelled the Communist Party of the Philippines, and its armed wing, the New People's Army, as terrorist organizations.

"There's a long history in the Philippines of the state security forces and pro-government militias assassinating people labeled as [communist] members or supporters," the rights group said.

The group said the government should publicly reject the petition and "ensure the safety of those listed in it, or risk being complicit in the resulting crimes."

Anje Marquez, the ecumenical group's spokeswoman, said the release of the list "is an attempt to silence critics" and allows security forces to go after people without due process.

Cristina Palabay, spokeswoman of rights group Karapatan labeled the government's "proscription petition" as "dubious and a maneuver to target persons in progressive organizations."

On the list are Communist Party of the Philippines founder Jose Maria Sison and his wife Juliet de Lima who are in exile in The Netherlands.

Also listed are Luis Jalandoni and Coni Ledesma of the National Democratic Front who are also in Europe, and Benito and Wilma Tiamzon, consultants during the peace talks.

Many on the list are peasant leaders, union organizers, activists, and human rights defenders.

Lawyer Edre Olalia, secretary-general of the National Union of People's Lawyers, said the list "forebodes a prelude to a more intense crackdown" against activist groups.

"It is part of a shotgun witch hunt designed to sow and create a condition of widespread and extraordinary fear and panic among the populace," he said.

Presidential spokesman Harry Roque, a lawyer, said the Justice Department "would not have filed the petition without evidence."