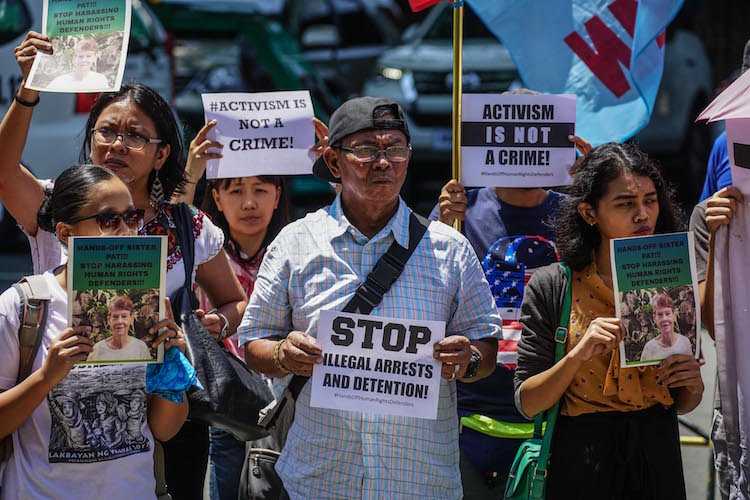 Activists — some holding images of Australian nun Patricia Fox — stage a protest in Manila to demand a stop to the persecution and harassment of political dissenters and human rights advocates. (Photo by Jire Carreon/ucanews.com)

Philippine President Rodrigo Duterte has personally ordered an investigation into the activities of Australian nun Patricia Fox for "disorderly conduct" and "violation of sovereignty."

The 71-year-old Philippine superior of the Sisters of Our Lady of Sion, an international Catholic congregation, was arrested and detained by immigration officials on April 16.

Authorities arrested the nun for being an "undesirable alien" because of her participation in protest rallies and for reportedly "engaging in political activities."

Sister Fox has been working in the country for the past 27 years, most of the time in poor farming and tribal communities.

"I ordered her to be investigated, not deported at once, not arrested, but invited to an investigation for disorderly conduct," Duterte told soldiers at a military ceremony in Manila on April 18.

The president said only Filipinos are entitled to criticize his administration.

"But if I will be insulted, in the cloak of being just a Catholic [nun] and you are a foreigner, who are you?" said a fuming Duterte. "Don't let her in because that nun has no shame! You do not have the right to criticize us."

The president said Sister Fox should instead focus her attention on the problems of the church and how the Australian government rejected refugees.

"You are too presumptuous about looking at the Philippines. You have human rights violations [in Australia] and it's worse. At least here I only kill criminals," said Duterte.

Human rights activists have blamed the Duterte administration's "total war" against narcotics for the death of thousands of suspected drug users and dealers in the past year.

The president said he would personally order the arrest of Sister Fox if she is caught attacking the government in demonstrations and protest rallies.

"Who are you? Just because you are a nun? You go back to your country and try to ponder the enormity of your problems," said Duterte. Australian nun Patricia Fox of the international Catholic missionary congregation Sisters of Our Lady of Sion speaks to reporters after her release from detention in Manila on April 17. (Photo by Jire Carreon/ucanews.com)

Catholic and Protestant bishops said Sister Fox's arrest and detention was "the most recent blow against church workers and religious institutions."

In a statement released on April 19, the Ecumenical Bishops' Forum noted what the prelates described as growing "unspeakable violence" being committed against church people.

"The church in the Philippines lives in perilous times," read the statement signed by Bishop Deogracias Iniguez for the Catholics bishops and Bishop Felixberto Calang for the Protestants.

The bishops said they "strongly denounced this absurd action" taken by the Philippine government. "We express outrage at this evil-doing," they added.

"We cannot comprehend why church people become targets of political persecution. When has it become a crime to accompany the poor and the oppressed in their struggle?" read the statement.

"When has it become a crime to preach the words of God and live-out the works of Christ?"

The bishops said what happened to Sister Fox "sends a chilling message to everyone," especially after the killing of Catholic priest Marcelito Paez in December and the arrest and detention of Protestant Bishop Carlo Morales last year.

"The persecution of church people does not only reveal the sword of a despotic government that seeks to suppress the church's role as a moral compass of society," said the bishops.

"It is a demonstration of [the Duterte] administration's noxious attempts to criminalize legitimate dissent," they added.

The church leaders then called on the faithful "to boldly resist state violence and political oppression, and continue to stand up for and work in solidarity with the poor, deprived and oppressed."