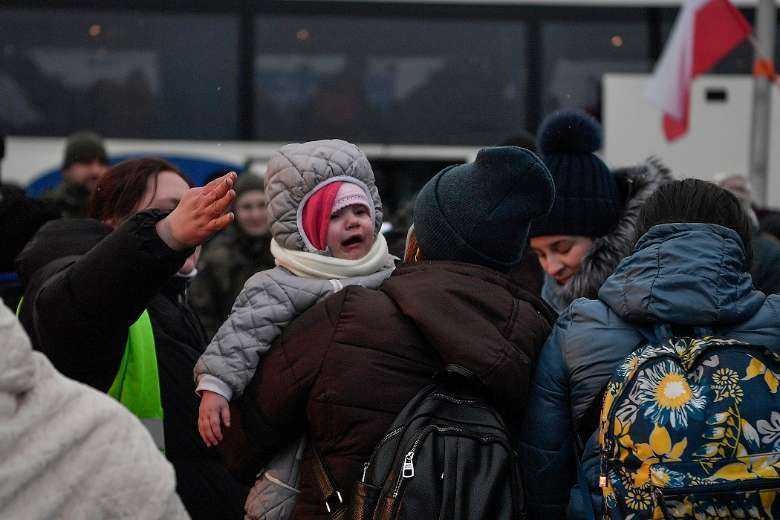 Refugees from Ukraine wait for transport after crossing the Ukrainian-Polish border in Medyka, southeastern Poland, on March 9. (Photo: AFP)

The Philippines would be willing to take in Ukrainian refugees as part of humanitarian efforts to help those fleeing invading Russian forces, President Rodrigo Duterte said on March 9.

He said he was more than willing to honor the country’s obligation to the international community should Ukrainian citizens seek refuge in the Philippines.

“We will honor our international obligation or commitment in the union of nations and the international community. We will defend those who cannot defend themselves, especially if they are victims of violence,” Duterte told reporters.

Duterte said he had signed an order requiring the Department of Justice to jumpstart the process of admitting refugees fleeing the war in Ukraine.

“I’ve already signed an executive order so that a system would be in place should there be a deluge of people seeking refuge because of the war,” he added.

He did not say how many refugees the Philippines would be willing to accept.

That is good news to our humanity. We have done that before and we did it successfully and fruitfully

Justice Secretary Meynardo Guevarra said the country would be ready to accept war victims if and when Ukrainian citizens seek refuge in the Philippines.

“But should there be any, applications will be evaluated in accordance with our laws and the recently signed executive order by the president … we will be ready,” said Guevarra in an interview with The Inquirer newspaper.

Bishop Ruperto Santos of Balanga welcomed the move, saying the taking in of Ukrainian refugees would be the Philippines’ “gift to the whole world.”

The bishop, who also heads the Catholic bishops’ Commission on Migrants and Itinerant People, said helping war victims was a moral obligation of all Catholics.

“That is good news to our humanity. We have done that before and we did it successfully and fruitfully,” he told church-run Radyo Veritas.

The bishops’ conference had asked for prayers for the people of Ukraine, which has suffered many civilian casualties since Russia invaded its neighbor on Feb. 24.

More than 1.5 million refugees from Ukraine have fled to neighboring countries over the last 10 days in what foreign policy experts said was the fastest-growing refugee crisis in Europe since World War II.

Bishop Santos urged other prelates to remember Ukrainians in their Masses. “We, chaplains, are offering Holy Masses to urge Russia to foster peace and stop the invasion,” he said.

MAMOUN ALSABOUNI
That's good news for our humanity and the refugees of all the world. The president is our icon of peace & stability.
Reply