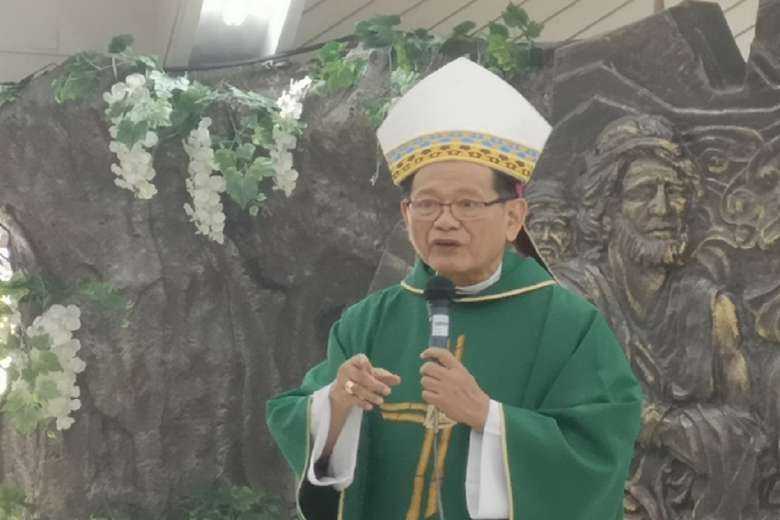 A Catholic bishop in the Philippines has attacked President Rodrigo Duterte’s plan to run for vice president, calling it a power play to benefit his personal interests.

“I am sure there is no discernment in his decision. This is a power play to benefit Duterte’s personal interests. Let the people turn him down,” he told Catholic-run Radio Veritas on Aug. 26.

He questioned how a “bully” like Duterte got elected in the first place. “How can we elect any such bully to office?” he added.

Bishop Bacani said Duterte has no place in public office because of his propensity to inflict harm and violence on others.

“He may have done good things after five years as president but all of them may be discarded because of his failures in fighting corruption and his war on illegal drugs. How many killings have happened under his watch?” he asked.

We keep on saying we deserve a better government. But what have we done to achieve this?

Bishop Bacani, who helped draft the Philippines’ 1987 constitution, said Duterte would violate the spirit of presidential succession if he was elected vice president.

The prelate was referring to a provision which states that a president can only serve one six-year term.

“If elected, he would have to succeed the president in case the president dies, resigns or is impeached. So, Duterte could be president twice. One has to look for the spirit of the law here, not merely its letters,” he said.

Duterte’s critics fear his running mate and close aide, Senator Christopher “Bong” Go, would be a puppet president or even step aside and allow Duterte to take office again.

“Duterte made [Go] a senator. Now Duterte is trying to make him president as his running mate. It will be as if Duterte will still be president,” said Jobel Jasmin, a Manila resident.

Jasmin said the Church needed to speak out more and warn Filipino voters “to avoid another six years of disaster.”

“We keep on saying we deserve a better government. But what have we done to achieve this? Now is the time to make it happen. Listen to Bishop Bacani and may more bishops speak out,” he said.