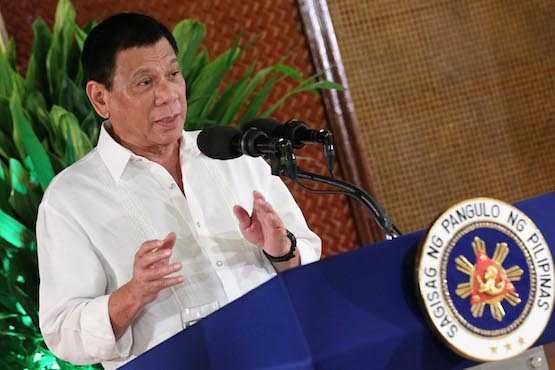 At least two leading church leaders in the Philippines said President Rodrigo Duterte, who has earned international criticism for his war on drugs, said he is "doing well" during his first 100 days in office.

"I think he is doing well, although sometimes he has a way with words and he is very loud," said Archbishop Ramon Arguelles of Lipa.

"You can see that he has an objective," said the prelate, adding that Duterte is not perfect even as he desires to bring change to the country.

Archbishop Arguelles said the president's anti-narcotics war, which has already claimed 3,684 lives since July 1, seem to be producing results.

"Is there rape now that are drug related? Maybe there still are but not that many unlike before," said the prelate. "Do you feel more safe now when you walk in the street or did you feel safer before?" he added.

The bishop, however, clarified that he is not in favor of Duterte's way of dealing with suspected drug users and dealers, but added that he appreciates the president's work for the poor.

"He wants to improve the lives of the poor and I want him to continue doing that," said Archbishop Arguelles.

"It's not perfect but the promised change is coming despite the challenges," said the Protestant bishop who added that "new doors and approaches of building relationships" with neighboring countries are being forged.

Bishop Pantoja, however, said Duterte's desire to get rid of illegal drugs opened a Pandora's box of "bloodbaths and killings."

"Criminals are being multiplied by the thousands as family members, relatives, and friends of those being killed harbor grudges against the police, the government, and the president himself," he said.

Bishop Pantoja said he supports Duterte's efforts to effect change in the country but some of the president's "words, pronouncements, and actions are in disagreement with God's Word."

"I will support him and encourage the church to stand behind him as God's anointed and minister to lead the country in this time of change," he said.

Meanwhile as he marked his first 100 days in power, Duterte obtained a "very good" satisfaction rating in a survey released by pollster Social Weather Stations on Oct. 6.

The survey results showed that 76 percent of Filipinos were satisfied with Duterte's performance so far.

The presidential palace welcomed the results of the survey, saying it is an indication that "the people, in spite of the noise, continue to trust the president."