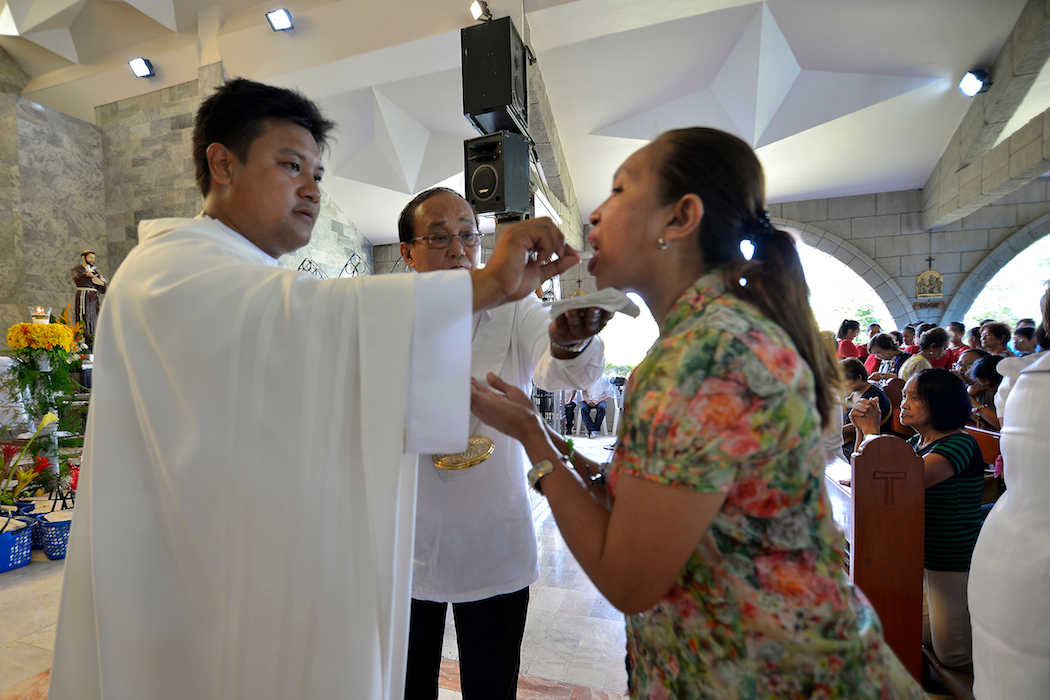 Father Mark Anthony Ventura, 37, was shot and killed after saying Mass in the northern Philippine town of Gattaran in Cagayan province. (File photo by Maria Tan)

Catholic bishops in the Philippines have condemned what they described as "unfounded rumors and malicious insinuations" being circulated by no less than President Rodrigo Duterte on the motive behind the killing of a priest in the country's north.

Father Mark Anthony Ventura, 37, was shot and killed after saying Mass in the northern Philippine town of Gattaran in Cagayan province on April 29. Police said a lone gunman shot the priest twice while he was blessing children attending Mass.

On May 20, Duterte presented a list of illicit affairs the priest was supposedly involved in titled "Possible Motive [Love Triangle]" with a picture of Father Ventura and eight women.

The president said the women were married to a vice mayor, a policeman, a soldier, and a businessman. He added that one of the husbands could have been behind the killing.

Bishop Pablo Virgilio David of Kalookan condemned the president's comments, saying Father Ventura had been murdered a "second time" by Duterte's insinuation that the priest was having an affair with eight women.

In a letter to priests in his diocese, Bishop David said "it pains me to note that Father Ventura is being murdered a second time ... by the highest official in the land."

The prelate told the clergy to ring church bells starting May 23 until May 31 "to call people to prayer for [Father Ventura's] second murder."

In a pastoral statement, Archbishop Socrates Villegas of Lingayen-Dagupan, former president of the bishops' conference, warned of "anti-Christian forces" that were shaking Catholic values to the core.

He said the spread of "fake news," drug killings and vulgarity were "social ills slowly eating the national soul."

The prelate said Duterte's vulgar language has disgraced the country's women. "Anger can be righteous but in recent months, anger had lost its righteousness," noted the archbishop.

He condemned the use of "vulgarity ... to mock the memory of the murdered; to calumniate a faithful departed who cannot defend himself; to gossip about the dead; to add inconsiderate sorrow to the grief of those they have left behind."

"Is murder to be excused due to the unproven immorality of the killed? Enough," said the archbishop.

Archbishop Utleg of Tuguegarao said he would continue to hope and pray that the truth will come out so that justice for Father Ventura can finally be served.

"We do not want to speculate on what the reasons are for his death," said the prelate, adding that he trusts that the authorities are "faithfully doing their job."

"Neither do we want that the investigation muddled by the spreading of unfounded rumors and malicious insinuations," he said.

"We wish them success, to come up with solid evidence, to apprehend the killers and the mastermind."

The Tuguegarao prelate stressed that Father Ventura was "an affectionate person, sympathetic and close to many people rich and poor, men and women, young and old."