Antonio Kho, a fraternity brother of the president and ex-election commissioner, had cleared Marcos Jr.'s run for president 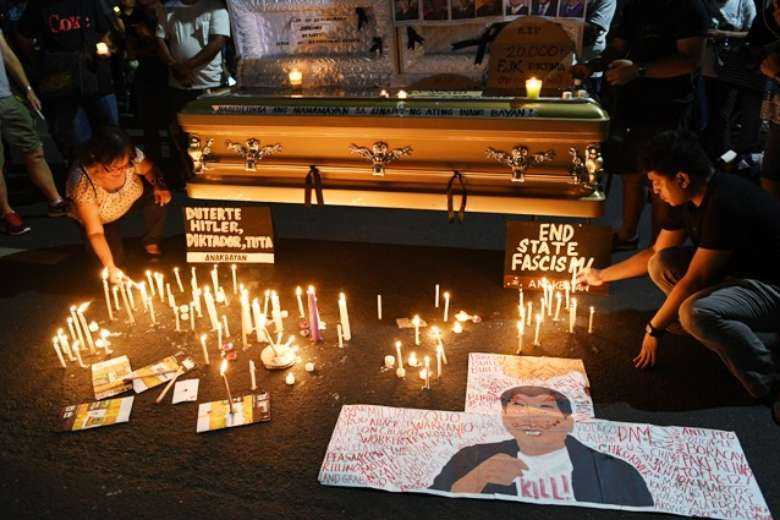 Activists light candles next to a coffin decorated with a caricature of President Rodrigo Duterte to protest the removal of Philippine Supreme Court chief justice Lourdes Cereno, who opposed the war on drugs, at a vigil in Manila on May 18, 2018. (Photo: AFP)

President Rodrigo Duterte’s appointment of his fraternity brother and ally as the newest member of the Philippine Supreme Court has come under close scrutiny.

Antonio Kho Jr., 55, a former election commissioner, was sworn in as the 193rd justice of the country’s highest court less than 24 hours after his appointment was announced on Feb. 23.

The president has ensured with Kho’s appointment that 13 of the 15 members of the top judiciary are his appointees.

Kho graduated from the same law school as Duterte and earlier invited criticism as election commissioner when he junked the petition against former lawmaker Ferdinand “Bongbong” Marcos Jr., clearing the path for his run in the upcoming presidential polls.

A group of civic leaders led by Carmelite friar Father Christian Buenafe had questioned the ruling. “Marcos Jr. violated the law, was convicted by the final judgment and is perpetually disqualified to hold public office,” Father Buenafe said in November 2021.

Human rights groups too questioned Marcos Jr. after he was convicted of moral turpitude. The Commission on Elections, however, said that the appeals court did not say in its ruling that he was prohibited to run for public office.

Even though you were appointed, may you have the courage to fight for what is right and just for the people, not for the person who appointed you

Kho was born in 1966 in Sulu in Jolo province in the Mindanao region. He ranked 10th in the Philippine bar examinations and practiced law in the private sector until he joined the Duterte administration in 2016.

Critics said Kho’s appointment was “clearly” influenced by his relationship with the president.

“Kho should not participate in Marcos cases, particularly the Comelec ruling where he participated and voted to allow Marcos Jr. to run for president,” martial law victim Dana de Guzman told UCA News.

“There are already 13 Duterte-appointed justices. Any case filed against Duterte or Marcos would surely be junked or dismissed. He [Duterte] has made sure he still controls the courts,” de Guzman added.

Father Simeon Galang of the Prelature of Libmanan, however, said Catholics must still trust in the system of governance to attain peace and stability.

“We must still trust in the process. It is the president who appoints members of the Supreme Court, or judges. This is how the constitution designed it. But, most importantly, let us trust in the conscience of those appointed. Even though you were appointed, may you have the courage to fight for what is right and just for the people, not for the person who appointed you,” Father Galang said.