Activists burn an effigy during a protest against Philippine President Rodrigo Duterte in Manila in this file photo. (Photo: AFP)

Philippine President Rodrigo Duterte has declared his intention to run for the vice presidency in next year’s elections, drawing condemnation from Catholic opponents.

On July 1, he announced that Filipinos could now consider him a “serious” candidate for vice president to “maintain equilibrium” in Philippine politics.

“It’s a matter of posturing, political posturing, so that they [Duterte’s opponents] will not treat me as badly because I am already an outgoing official,” Duterte said in a speech aired on national television.

“You can say that to maintain the [political] equilibrium for all, consider me a candidate for the vice presidency at this time.”

Duterte’s remarks immediately drew flak from Catholics fearing a continuation of the war on drugs that has claimed thousands of lives and other controversial policies.

They accused him of trying to orchestrate a puppet president to replace him so that he could pull the strings as a de facto leader.

If this is not an abuse of power, this would surely be a deep craving and addiction

An elected president can only serve one term in office in the Philippines but the constitution does allow a former president to run as vice president.

“If this is not an abuse of power, this would surely be a deep craving and addiction,” he posted on social media. 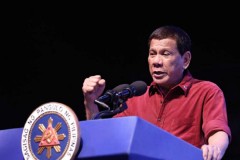 Seminarian Gerard Lustre said Duterte’s move came as no surprise as he had done something similar when he was mayor of Davao City in Mindanao.

In 2010, Duterte was elected vice mayor, succeeding his daughter, Sara Duterte-Carpio, who was elected as mayor.

“She became mayor in Davao City while he served as vice mayor. This was to break the cycle of a three-term limit. You can see how the Duterte family positions itself in politics,” Lustre told UCA News.

PDP–Laban, Duterte’s party, recently announced it had urged Duterte to run for vice president and for him to choose his running mate as president.

Duterte, however, claimed that if his president lost, he would join the police to solve crimes.

“If I run for vice president and win and the president is not my ally, all I have to do is join the military and police in the fight against crime, drugs and all,” said Duterte.