Pope Francis to convene a consistory to set the date 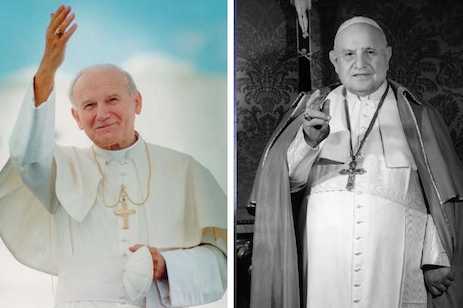 On the same day that he released an encyclical partially written by one of his predecessors, Pope Francis also offered a remarkable sign of continuity with two others, confirming that Popes John XXIII and John Paul II will likely be canonized together within the year.

A Vatican spokesman said today that Francis will convene a consistory, or a gathering of cardinals, to set the date for a canonization ceremony in the near future.

Francis has approved a miracle attributed to John Paul II, which involved the healing of a Costa Rican woman from a severe brain injury, and apparently is willing to move forward with a sainthood declaration for John XXIII without waiting for the formal process of documenting a second miracle to reach conclusion.

With regard to John XXIII, a Vatican spokesman said today that because it's the 50th anniversary of the Second Vatican Council (1962-65) and because "no one doubts" the late pope's holiness, Francis has decided to go ahead.

John XXIII was beatified under John Paul II in 2000. As it happens, he was combined with another pope that time too, beatified alongside Pius IX, the last pontiff to also be a secular monarch whose reign saw the loss of the Papal States in 1870.

The Vatican also announced that Francis has approved a miracle attributed to Monsignor Alvaro del Portillo, the successor of St. Josemaria Escriva as the head of Opus Dei, clearing the way for beatification of Escriva’s successor.

Full Story:John XXIII, John Paul II to be canonized together