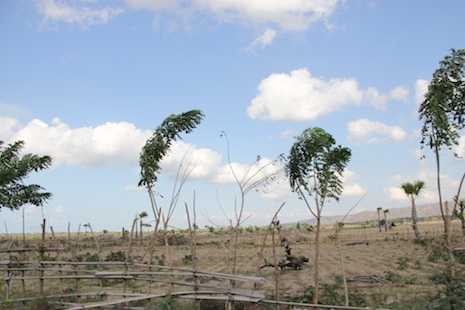 A prolonged drought in Indonesia's East Nusa Tenggara has led to arid farmland throughout the province. (Photo by Ryan Dagur)

Ribka Tenis' family used to eat three square meals a day. Today, they're lucky to eat once as the seasonal rains have yet to arrive this year, leading to food shortages throughout Indonesia's East Nusa Tenggara province.

"We planted corn in January. But the crops died because the rain stopped," the 45-year-old mother of three told ucanews.com in her home in Nunbena in South Central Timor district.

The family's only source of income is the US$1.80 a day her husband earns as a farmhand — when he works. But the family is squeezed since a side-effect of the drought has led to rising corn prices, the stricken region’s staple crop.

Tenis' family is one of thousands in rural areas in the province facing food shortages because of the lack of rainfall, which — according to environmentalists — is an effect of climate change.

They, along with 12,000 other families in Kualin and South Amanuban sub-districts who have suffered the worst of the crop failures, face an uncertain future, aid workers say.

The region's only other crop of note is copra, the dried meat from a coconut used to extract oil. But few families have it and the crop is cheap, selling for about 20 cents a kilogram, says Alexander Kmio, a village head in Toineke of Kualin sub-district. There's little income to be made from it, he added.

Farmers planted tubers — a typically rugged, drought-resistant crop — but those too died from lack of water, Kmio told ucanews.com.

East Nusa Tenggara is one of 16 provinces in Indonesia suffering from drought this year, according to the National Disaster Management Agency. Only two of the province's 22 districts have been insulated from the current drought.

The agency's spokesman, Sutopo Purwo Nugroho, said the lack of rain has affected some 111,000 hectares of agricultural land.

And it's not expected to get better. A predicted El Nino event is forecast to blanket the region through November, bringing wind and steaming temperatures that will make it difficult for farmers to grow most crops. The consequences for East Nusa Tenggara could be dire.

"This will have an intense impact on the region,” Nugroho told ucanews.com. “Even next year's rainy season may be pushed back as a result.”

Herry Naif, executive director of the province's Forum for the Environment, says the region has seen a gradual decrease over several decades in the length of the rainy season, which he attributes to climate change.

Several decades ago, the rainy season lasted from October until April. "Currently, the rains come between November and March. And it's also inconsistent, sometimes falling only for two months," he told ucanews.com.

Water remains scarce in the province, leaving families with a desperate choice: use whatever is available to sustain crops, or to sustain lives. Once they water the crops, there's little left to drink, Naif says.

Usually, they choose to use the water for their crops, he said. “There's a very limited water catchment area [for drinking],” he said. Naif said deforestation caused by illegal logging and mining also has exacerbated the issue, with fewer trees left to absorb water.

Saulus Maus, 52, from Oebelo village in South Amanuban, recalled that until the 1990s water was plentiful and easy to find. Now he has to walk two kilometers to draw water from a well.

“When we wanted to find water, we would dig a well, but now it is hard to find. Not all places have water,” he told ucanews.com. A villager sits outside a typical home found in Besipae, in Indonesia's East Nusa Tenggara. (Photo by Ryan Dagur)

So far, the government has taken some preventive measures, allocating about US$1.6 million for the constructions of reservoirs and ponds. It also launched a project to dig 1,000 wellbores to try and capture whatever water can be found underground.

However, environmental activists say the measures were meaningless without addressing illegal logging and mining.

"They want to build dams and ponds, and at the same time clear the forests for mining. Then where is the water coming from?" asks Melky Nahar, campaign manager for the environmental group NTT WALHI.

Because of the inconsistent rainfall, it's difficult for farmers to plan and predict their planting and harvesting seasons, Nahar says.

For their part, community-based organizations are working with farmers to develop adaptive farming techniques to try and help families negotiate their way around unpredictable weather patterns and prolonged drought.

"It is difficult, however, we have to find the right way so that people are not constantly starving," Nahar says.

Aid workers helped residents diversify their crops — adding vegetables like cassava and sorghum — so that they were less reliant on corn, an environmentally demanding crop, Nahar said.

In the town of Atambua, Franciscan Father Lazarus Subagi organized dozens of farmers to increase food production during the brief rainy season.

"We rented unused land. When it rained, we worked hard to process the land. So until now, our food supply is still sufficient," he said.

"Our Church must be able to convince farmers that God can also be found in a field," he said.