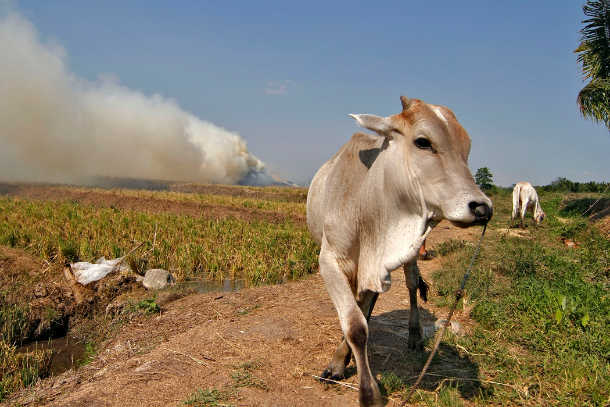 An ongoing drought is threatening farms and farm animals in the southern Philippines. (Photo by Vincent Go)

Farmers in the southern Philippine region of Soccsksargen have resorted to selling their farm animals to survive the impact of a drought that has reportedly ravaged about 15,000 hectares of farmland.

Father Ariel Destora, director of the social action center of Marbel Diocese, said the scorching heat brought about by the El Nino phenomenon that has hit the region in Mindanao this year had dried up grasslands.

El Nino is a climate cycle in the Pacific Ocean caused by warm water. The warm water pools, which causes droughts.

"Some farmers are being forced to sell their cows because they have nothing to eat," said Father Destora as he appealed for donations to help farmers and residents affected by the arid conditions.

Several farmers and fisherfolk groups appealed to the government last week for "livelihood assistance" of at least US$197 per affected family.

"Some parts of the diocese have no water," said the priest. "Life has become hard for those severely affected."

Marbel Diocese straddles the provinces of South Cotabato and Sarangani and parts of Sultan Kudarat in the Soccsksargen region that includes North Cotabato province and General Santos City.

North Cotabato province, which is suffering the brunt of the drought, had already declared a state of calamity after crop losses reached at least US$12 million.

Of the 18 local government units in the province, nine were reported to be severely affected.

In South Cotabato province, the dry spell already damaged agricultural crops worth about US$232,000 as of the end of March, according to data from the local agriculture office.

"We are doing our best to help the farmers," said Ray Embajador of the Department of Agriculture.

He said his office is still in the process of looking into the impact of the drought in order to provide "appropriate intervention." He said at least 11,604 hectares of rice fields and 3,120 hectares of cornfields in the region have been affected.

About 71,909 families or 359,545 individuals have been hit by the dry weather in North Cotabato province alone, according to the National Disaster Risk and Reduction Management Council.

Estimated losses caused by the El Nino phenomenon across the country so far have reached about US$97 million.

The state weather bureau announced that dry weather is expected to persist until October.