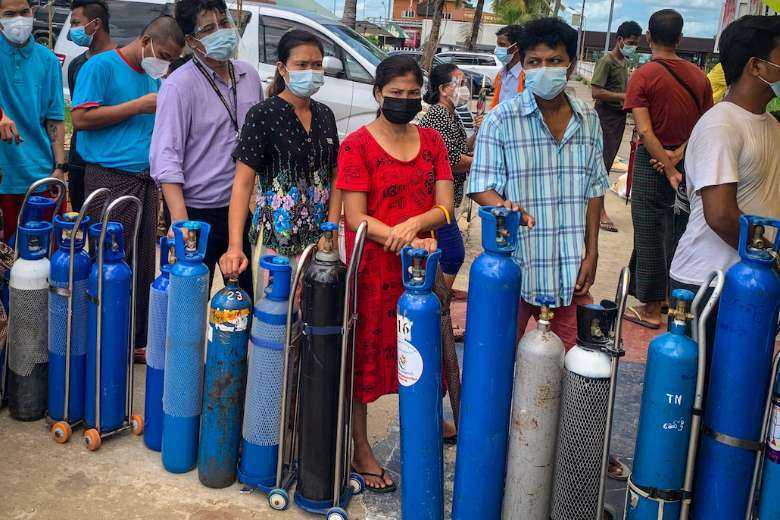 People defy a military curfew as they wait to fill empty oxygen canisters in Yangon on July 14 amid a surge in the number of Covid-19 cases in Myanmar. (Photo: AFP)

Cardinal Charles Bo of Yangon has pleaded for urgent medical aid as the third wave of Covid-19 worsens in coup-hit Myanmar.

“Let all those who hold the guns, in the name of the Lord, we plead, drop all guns, bring medical care at once,” he said in a homily on July 18.

The prelate said the Southeast Asian nation is facing three major challenges: Covid, conflict and the collapse of the economy.

“But now every breath has become a challenge. Day and night thousands are struggling to breathe. This deadly pandemic is stealing the basic gift of nature. Oxygen which is freely available in the air has suddenly become a precious commodity for which people are queuing up day and night.”

Cardinal Bo decried the lack of medical personnel and volunteers as the Covid crisis spirals out of control.

As a human family, we face an existential threat. Starvation, anxiety and fear occupy their hearts

“Hospitals are full. Cemeteries have long queues of dead bodies. Many die without saying goodbye, without seeing their loved ones,” he said.

His appeal comes when hospitals are full of patients and people are desperately searching for oxygen for their loved ones at home after the surge of cases in the impoverished nation.

Amid restrictions on taking oxygen from private factories and a crackdown on health workers, the spike in cases is the latest blow to a country reeling from the Feb. 1 coup and a bloody crackdown on protesters that has claimed more than 900 lives.

Cardinal Bo, who is president of the Catholic Bishops’ Conference of Myanmar, said Covid was making a “merciless attack'' on simple people who were already wounded by months of conflict, death and displacement.

“As a human family, we face an existential threat. Starvation, anxiety and fear occupy their hearts,” he said.

The prelate said at least 20 percent of Myanmar’s people could have been infected. About 90 percent of towns have reported cases.

“Apocalypse not yet, but if there is no conversion of hearts, many thousands will be buried in the coming months,” Cardinal Bo warned.

Tom Andrews, UN special rapporteur on Myanmar, said the military junta lacks the resources, capabilities and legitimacy to bring the crisis under control.

“The crisis is particularly lethal because of the pervasive mistrust of the junta,” he said.

Public experts believe the actual death toll could be higher than the official figure.