Church groups, activists say they want to make sure nature rights are enshrined in charter 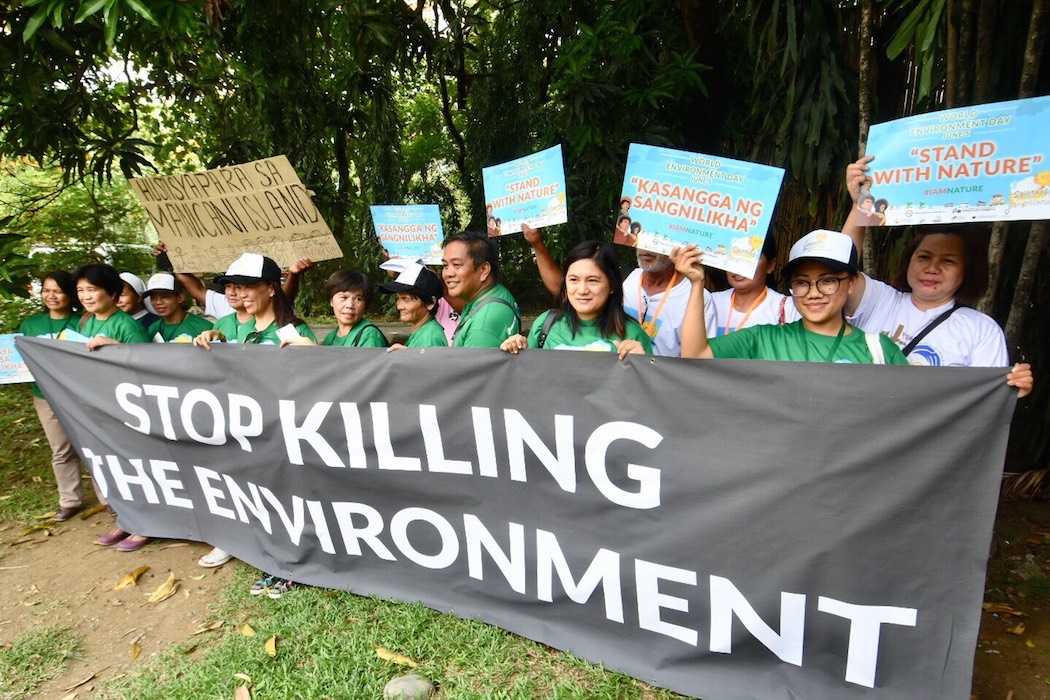 Environmental activists on a two-week nationwide caravan to press for the passage of a law promoting rights of nature arrive in Manila on World Environment Day. (Photo by Angie de Silva)

Polluters of the environment, including big business and government officials, will be guaranteed to face criminal charges if activists get their way and Philippine legislators pass a bill being prepared for them to grant rights to nature.

Church and environmental activists ended a nationwide caravan in Manila on June 5, World Environment Day, to dramatize their call for the passage of a "rights of nature" law.

Rather than treating nature as property under the law, "rights of nature" acknowledges that nature in all its life forms has the right to exist, persist, maintain and regenerate its vital cycles.

Led by the Philippine-Misereor Partnership Inc. (PMPI), the church and environmental groups are pressing for the "holistic recognition that all life, all ecosystems are deeply intertwined."

The PMPI is a social development network of people's organizations, faith-based groups, and Misereor, the overseas development agency of the Catholic Church in Germany.

"Our environmental laws only protect the rights of mankind over nature and allow the destruction of biodiversity but do not punish those who abuse the environment," said Yolanda Esguerra, PMPI coordinator.

Franciscan nun Crescencia Lucero said the bill, once enacted into law, can be used to hold perpetrators of environmental destruction accountable.

"It is possible to sue even the president or anyone in government if their policies permit ecological degradation," said the nun who also sits on the board of the influential Association of Major Religious Superiors in the Philippines.

Father Edwin Gariguez, executive secretary of the social action secretariat of the bishops' conference, said "the right of nature is the backdrop to our campaign against mining, dirty energy, and climate change."

The priest said it was also the aim of the caravan to call on President Rodrigo Duterte to honor his pronouncements to protect the environment, especially by closing destructive industries like mining.

"We are submitting one million signatures [to Duterte] as testament to this clamor," said Father Gariguez.

The PMPI's Esguerra, meanwhile, said they were "troubled" that the Philippines has been tagged one of the "most dangerous places for environmental advocates" in the world.

"The victims are mostly indigenous peoples, farmers and community leaders and advocates," she said, adding that poor people are "among the most affected by environmental destruction and suffer the brunt of natural disasters."

Ecuador was the first country to recognize "rights of nature" in its constitution that was ratified by a referendum in September 2008.

The Ecuadorian Constitution states that "rather than treating nature as property under the law, rights of nature articles acknowledge that nature in all its life form has the right to exist, persist, maintain, and regenerate its vital cycle."