Dozens injured in battle to stop church destruction in China

Ever growing number of police-parishioner confrontations 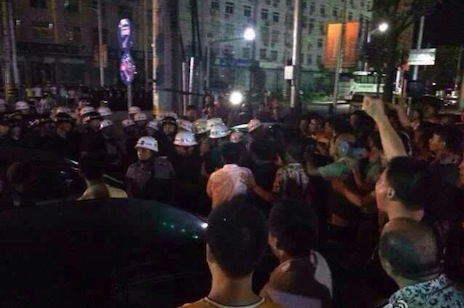 Up to now the Chinese Government has ordered the demolition of about 131 churches in recent months.  Actual data may be three to four times that amount, yet unverifiable.

On July 21 at 3AM, in Water Town, Pingyang County, Wenzhou City, Zhejiang Province, nearly 1000 christian believers rallied on Kau Yan church grounds to stop the impending demolition. People were beaten by police and urban management. Dozens of Christian people were injured and hospitalized during the violence. About an hour later the demolition team evacuated the area. The fact that the demolition of churches is part of a wider plan was clearly revealed by the Secretary Xia Baolong who, in an interview with Xinhua on February 17, announced that  “hostile forces of the West” had infiltrated the Christian communities. And in July 2013 he warned the Party of Wenzhou against the influence of the underground community.

Almost as if to confirm these “concerns”, on May 6 the University of International Relations and the Academy of Social Sciences published a “Blue Book”. It states that all religions pose one of the biggest challenges to national security and that “hostile western forces are infiltrating the religions of China”.

By now, the effort to suffocate religions, control or eradicate them and demolish their buildings has become a nationwide campaign.

As of May of this year more than 60 churches in Wenzhou alone have received a demolition notice. Some have had their annexes demolished and crosses either removed, demolished or covered.

It is worth noting that in 2003-2004 a campaign was launched in Zhejiang province to demolish hundreds of churches. Since then, the Christian community of Zhejiang and Wenzhou have grown even more and now the Christians are about 15% of the population of the city of 9 million inhabitants.

The city of Wenzhou (known as the Jerusalem of the East because of its sizable Christian community) has had the most churches demolished.

Some churches in Yongjia County, Wenzhou, have also been ordered to stop Sunday school programs offered to minors.

Yongjia County has the largest number of churches with crosses removed, and Sanjiang Church in Yongjia County, which cost 30 million yuan (US$ 4.8 million) to build, was demolished.