Down and out in Bangkok 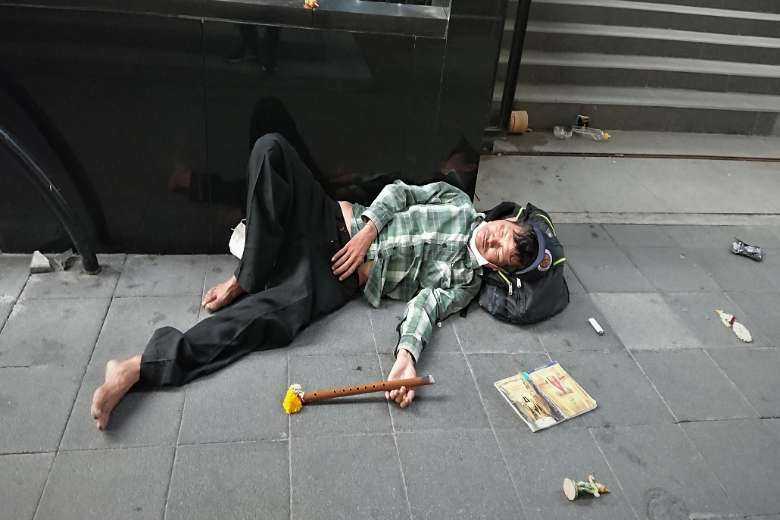 A homeless man sprawls on a sidewalk beside a high-end shopping mall in central Bangkok. (Photo: UCA News)

The man sprawled asleep on a sidewalk in the muggy heat on a recent afternoon in central Bangkok, his head resting on a tattered black sports bag with his meager possessions in it.

In one outstretched hand lay a wooden flute, which the middle-aged man employed for begging from passersby by blowing simple traditional melodies on it.

Disheveled and shoeless, the man was a pitiful sight and looked out of place beside a luxury mall in the commercial heart of Thailand’s capital where the city’s wealthiest residents dine in gourmet restaurants and purchase designer brands like Gucci, Louis Vuitton and Hermes.

This unfortunate soul is hardly alone in Bangkok. All around the city the number of homeless people has grown markedly in recent months as an ongoing Covid-19 outbreak has battered the country’s once relatively robust economy.

As jobs have dried up, untold numbers of low-income earners have been plunged into abject penury. Many of the poorest have wound up without a roof over their head.

At a nearby street corner several men and women sat and reclined on cardboard laid on the pavement. They, too, were unemployed and the sidewalk had been their home for days.

Am I afraid of getting Covid? I don’t care if I get sick or die

“We have no money and nowhere to go,” said one of them, a scruffy man who appeared to be in his 40s.

When the rain comes pouring down, which it frequently does during the current monsoon season, they seek shelter under the eaves of nearby buildings. But that’s not the worst of it. Nor is it the gnawing hunger. The worst is a sense of hopelessness.

None of the vagrants wore face masks, which is mandatory in public during the ongoing pandemic, yet they weren’t bothered about getting infected.

“Am I afraid of getting Covid?” the man pondered when he was asked. “I don’t care if I get sick or die,” he added with a tone of resignation.

A couple of his companions were visibly high or inebriated in a testament to the toll that substance abuse was taking on them. Many homeless people in Bangkok are addicted to cheap and readily available methamphetamine. Others suffer from mental health issues.

Many homeless people around town depend for their survival on the kindness of strangers who give them food, water and occasionally money.

One such kindly stranger is Supansa Boontong, a street vendor who sells barbecued meats on skewers and traditional homemade desserts to passersby. Every day she hands out some leftovers to people sleeping rough on the street.

“I feel sorry for them,” she said. “Nowadays it’s easy for poor people to lose the little they have.”

As she makes her rounds daily with her pushcart in a part of central Bangkok close to a collection of high-end shopping malls, she sees several homeless people.

“Some of them stay on the streets long-term. Others come and go. I think they get a job or some money from somewhere,” Supansa said.

Yet even as Bangkok’s economy is slowly restarting after a months-long lockdown, the plight of the city’s poorest residents is unlikely to end anytime soon.

Thailand is the most economically unequal country in Southeast Asia with the richest 1 percent of Thais owning two-thirds of the nation’s wealth while the bottom 10 percent own no wealth at all, according to a 2018 survey by the Credit Suisse Research Institute.

If Thailand’s economic history offers any guide, income distribution will worsen in the coming months

Even the bottom half of Thais owned only a 1.7 percent share in the country’s wealth while the top 10 percent had a nearly 86 percent share. Income inequality was also found to be the worst within ASEAN. At the same time, the ratio of household debt to income was nearly 149 percent in 2019.

And that was before the coronavirus pandemic, which has only exacerbated the stark inequalities between rich and poor in this predominantly Buddhist nation. The severe downturn in the economy, fueled by a total absence of mass tourism for over a year, has driven millions of Thais back into poverty, making it hard for them to make ends meet.

“The Covid-19 outbreak will only deepen existing income and wealth inequalities. If Thailand’s economic history offers any guide, income distribution will worsen in the coming months,” M. Niaz Asadullah, a professor of development economics, and Ruttiya Bhula-or, associate dean of the College of Population Studies at Bangkok’s Chulalongkorn University, warned recently in a commentary.

“A prolonged crisis is likely to deplete whatever valuable assets [poorer Thais] have. The adverse impact on inequality will only increase if more decisive and targeted measures are not taken for the poor and these vulnerable groups.

“Millions of Thais remained marginalized even before the Covid-19 outbreak. With its already highly unequal distribution of income and wealth, Thailand cannot afford a further widening of the wealth gap. Therefore, more extensive and universal protection of those in vulnerable employment groups should be the policy priority as the coronavirus crisis intensifies in the coming months.”

However, no sustained government programs aimed at alleviating the financial situation of impoverished citizens have been in the offing. Nor is likely that any will be forthcoming under the current conservative military-allied government, whose priorities appear to lie elsewhere than poverty alleviation.

As matters stand, many Thais now languishing homeless on the streets of Bangkok will continue to have to depend on the kindness of strangers to survive.

That’s hardly a fair or sustainable state of affairs, according to Supansa, the street vendor. “It’s not handouts from me or others these poor people need. They need decent jobs and help from the government,” she said.