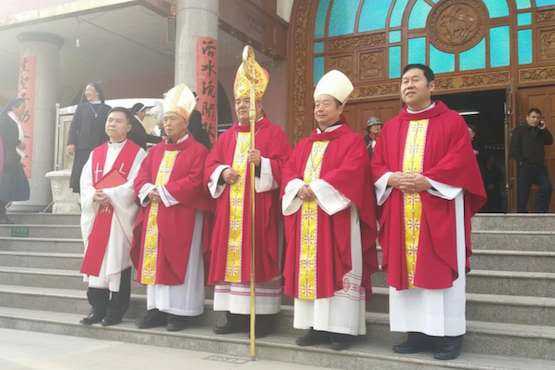 An underground bishop has been openly installed in northwest China in a ceremony that some diocesan priests and parishioners avoided attending because they were unsure of its validity.

Bishop Joseph Han Zhihai of Lanzhou in Gansu province was openly installed at the Sacred Heart Cathedral on Nov. 10.

Bishop Han said via social media that "the Holy See is pleased to see such result." The message was purportedly sent out for the benefit of his diocesan priests.

However, Father Paul of Lanzhou told ucanews.com that some of Bishop Han's diocesan priests refused to attend the installation since they were not convinced the message was accurate.

Among 38 priests from Lanzhou Diocese, 12 who did not attend the installation included priests studying abroad, Father Paul said, adding that in total 46 priests, 47 sisters and more than 300 Catholics from Lanzhou, Pingliang and Tianshui attended the ceremony. Government officials from the Religious Affairs Bureau and the United Front Department from Lanzhou likewise attended.

"Some people might have come from the public security authorities as well but they were not in uniform," Father Paul said.

Father Paul said he believed Bishop Han's installation is "good for the development of the diocese." Only 300 people joined the installation ceremony of Bishop Joseph Han Zhihai at the Sacred Heart Cathedral in Lanzhou. (Photo supplied)

A priest, who does not agree with Bishop Han's installation and did not attend the ceremony, told ucanews.com, that some parishioners he serves also could not accept the bishop's installation.

They said the bishop would have to get close to the state-run Chinese Patriotic Association (CPA), an organisation designed to control the church in China. The CPA has no ties with the Vatican and it is shunned by most of the country's estimated 12 million Catholics. The CPA is also accused of corruption by Catholics.

He emphasized that according to the Code of Canon Law, "whoever has been promoted to the episcopacy must receive episcopal consecration within three months from the receipt of the apostolic letter and before he takes possession of his office."

"Being a bishop for more than a decade and only being installed until now, it is certainly not in compliance with the law of the church," he said.

Another priest, who did not want to reveal his name, was concerned that if Bishop Han follows government policy too closely it would polarize the diocese.

The day after his installation, the bishop took nearly 80 priests and nuns of Lanzhou, Pingliang and Tianshui to visit the former communist revolutionary base in Jinggangshan which is between Jiangxi and Hunan.

Bishop Han was secretly consecrated in 2003 and had not officially been recognized by the government until the recent installation.

Although he was not recognized by the government for many years, some parishioners and priests questioned his participation at training classes to learn the "spirit" of the National Religious Affairs Conference in June 2016. The five-day workshop was run by the State Administration of Religious Affairs (SARA) for Catholics.

China observers believe the workshop was a further sign of the Communist Party inserting itself into church's affairs after the National Conference of Religious Work's and the SARA's response to an inspection by the Party's anti-corruption watchdog, which criticized the administrative body's loose control on national religious groups.

More than 150 people, who are members from the bishops' conference, the Catholic Church Administrative Commissions and national and regional CPAs, including several illegitimate bishops, attended the training class.