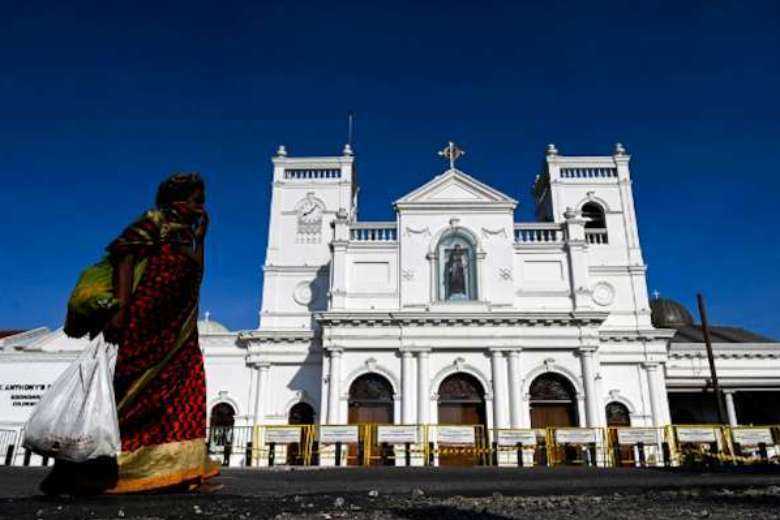 A woman walks past St. Anthony’s Shrine on the first anniversary of the Easter Sunday attacks in Colombo on April 21, 2020. (Photo: Ishara Kodikara/AFP)

At the beginning of each Christmas season, the sounds of firecrackers are heard all over Sri Lanka's Negombo town. But this year, the town is silent.

It has been 19 months since bombs exploded in several places including Negombo's St. Sebastian Church on 2019 Easter Sunday morning, killing 279 people mostly Christians.

But those involved in it "have not been brought to justice.  All those who lost their parents and children still spend their days in tears,” said Surani R. Fernando, a Sunday school teacher in Negombo.

"When will we catch those behind these bombers?" asked Fernando, who helps bomb victims in Negombo.

"It seems that politicians from time to time use the victims to establish their power. They don't seem to be doing anything for the victims," she said.

A Presidential Commission of Inquiry was appointed to investigate the serial bomb explosions that shocked the nation on April 21, 2019. It handed over its interim report to President Gotabaya Rajapaksa in December last year.

The previous government was blamed for its inability to prevent the attacks despite prior intelligence made available on the impending attacks.

Cardinal Malcolm Ranjith said there is a question as to whether there is a satisfactory investigation into the financing and sponsorship of the attack.

"Those responsible for the Easter bombing must be punished and if not, an alternative course of action will have to be taken," the prelate said on Dec. 4.

Cardinal Ranjith urged that the investigation not be pushed back and that no attempt should be made to cover up the incident through political deals.

Minister Sarath Weerasekara told parliament that all those involved in the Easter massacre – close to 260 people – had been arrested.

Chief Opposition Whip Lakshman Kiriella said both sides of parliament and even the cardinal have doubts about the Easter Commission.

"Everyone is asking when will the perpetrators be punished in connection with these blasts," said Kiriella.

Former Chief of Defense, retired Navy Commander Admiral Ravindra Wijegunaratne said he believes the attack was carried out under the full supervision of a foreign terrorist group.

"Many of those involved in the bombings were educated abroad. The bomb planted in a van in Kochchikade and the previous training in detonating a motorcycle in Kattankudy show how well this was planned. This is not something that was planned in Sri Lanka," Wijegunaratne said before the Presidential Commission on Dec. 5.

Former president Maithripala Sirisena said he had no responsibility to prevent such attacks, adding that the responsibility lies with the security forces and intelligence services.

Fernando said that all those involved in these attacks should be punished regardless of their rank.

"If there are rulers who have allowed the Easter attack and have fled the country, they should be given the maximum punishment," said Fernando.

"Moreover, it should be investigated whether some politicians took bribes from Muslim extremists and allowed this to happen in silence," she said.