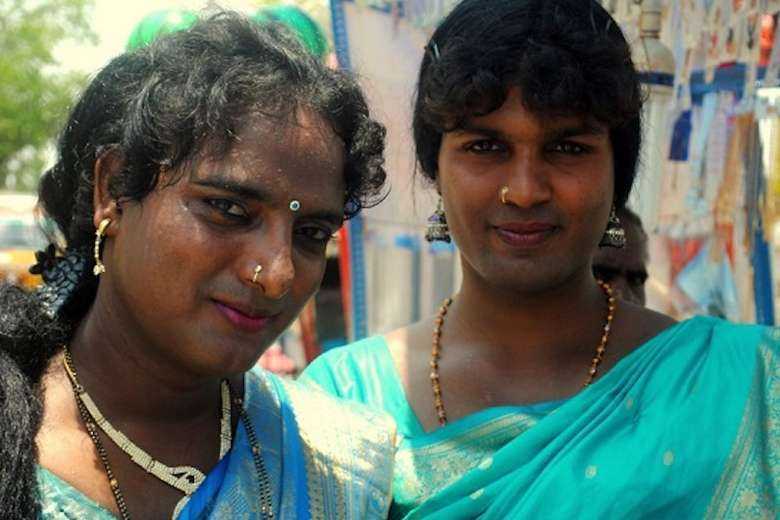 Friday, June 10, was a day of great experiences. Five volunteers including myself drove 60 kilometers up and down Tumkur Road from Bangalore to nearby Dabbaspet in one van and two cars. Our mission was to visit 80 transgender people in 14 hamams (transgender homes) and to distribute dry ration kits as a gesture of love for them.

For the past two weeks, we have been receiving frantic calls for help from several hamams on Tumkur Road. The Covid-19 lockdown and empty roads without traffic put transgender groups in an existential struggle for survival.

We left around 4pm once we finished loading up the van at the Hope Society office in Malleswaram 18th Cross. I was joined by Father Mario from the Hope Society, Vinod Kumar, founder of the Good Quest Foundation, along with its director, Santosh, and a volunteer, Rebecca.

At the first stop on the way near Yeswanthpur, we met Rakshitha, who was a transwoman for many years. She knows every one of her friends by name in every hamam.

Rakshitha’s life had a turnaround and she returned home to live with her parents, abandoning the typical work of a transgender person such as begging or sex work. Now she is a proud employee in a company. However, she has also been a volunteer with the Good Quest Foundation with an aim to make her old friends believe that an alternative life is possible.

The first hamam we visited had the largest number of transgender people, about 30. They gathered there from about five local hamams. We shared with them 15 packets of rations, each containing about 12 kilograms of dry rations and 18 items. Each packet had 5kg of rice, enough for two persons to survive for about two weeks and costing about 700 rupees (US$9.55).

The dry rations were gifted by Claretian priests through the Hope Society. Meanwhile, the Good Quest Foundation arranged for toiletries from Himalaya company.

Sandhyama, one of the beneficiaries, expressed gratitude for the assistance and recalled how difficult life has been for the transgender community since the pandemic struck.  “You are one of the rare people who thought of us. Otherwise, nobody bothers about us,” she said on behalf of all.

Over the next five hours, we moved to our other destinations. As we met the residents, we found their usual cheerfulness and makeup on their faces were missing. They looked exhausted and their appearances spoke volumes about their struggles.

Their sorry state was in stark contrast to their happy and healthy appearance during the Christmas program a few months ago. No doubt Covid has taken a heavy toll on their lives. I felt guilty when one complained, “What took you so long to come?”

In fact, we have been waiting for donor approval and funds. However, no promised funds came, prompting us to decide that we could not wait any longer when people were starving. We decided to mobilize with what was available in the society and prepared the kits. Agencies can wait for their formalities, but hunger can’t.

In two places, we were greeted with coffee and snacks, and we had an opportunity to talk about alternative options that change the lives of these people. When asked about their income, some said they make 10,000-15,000 rupees a month. Vinod Kumar proposed helping them to start small businesses.

However, one of them threw a hard question: “Who is going buy anything from us? The way people look and talk about us when we move around, it is very hurtful. Will they come to our shops?”

In fact, this embarrassing question was aimed at a society that wants them to change, but is the society willing to change its mindset?

It seems these people are relatively comfortable if they can stay indoors. They are fearful of facing discrimination in public. They are fine with any packing or production at home. The important issue is to sort out how to sell their products.

On the way back, I was thinking that they are just a handful of about 12,000 transgender people in Bangalore, a city that has hamams on every exit road. In the coming days, we would like to cover them all with promised support from Caritas and the Functional Vocational Training and Research Society.

Although we were wearing masks, the residents of every hamam recognized us as we were there for our Christmas carol program. “Thank you, Father,” they would say. Vinod introduced me as “Father” to them and I felt it was good for them to know the Catholic Church was doing its bit.

In the past one year, I have visited numerous places to provide survival kits to marginalized groups like migrants, refugees, transgender people and people with leprosy, HIV and disabilities. I have been to places I had never visited and it is unacceptable how this otherwise posh city treats such groups and allows them to live in unimaginable conditions.

There is a long road ahead for achieving real growth and development that puts humanity first. We need more committed individuals, civil groups, the Church and the government to create a better future for people on the peripheries.

During Covid, we have reached out to more than 30,000 families with aid under the banner of CoronaCare Bengaluru, an umbrella of Christian NGOs in Bangalore — Hope, BREADS, ECHO, AIFO, Good Quest Foundation and Orione Seva. We need more individuals and organizations to move forward with their resources to be with these groups like us. Only providing food is not enough, our presence also matters.

As we returned home by 10pm, we felt happy to make the journey of love, and we decided we should get back soon to fulfil out promises.

Jesus would have been very happy to join this trip. Maybe HE was there anyway!

Father George Kannanthanam is a Claretian priest and social worker from Bangalore, India. He has worked on the peripheries for the last 30 years for the cause of prisoners, alcoholics and those affected by leprosy, HIV, disabilities and disasters. He was involved with disaster management programs for victims of the tsunami, earthquake in Nepal, floods in Kerala and now Covid.