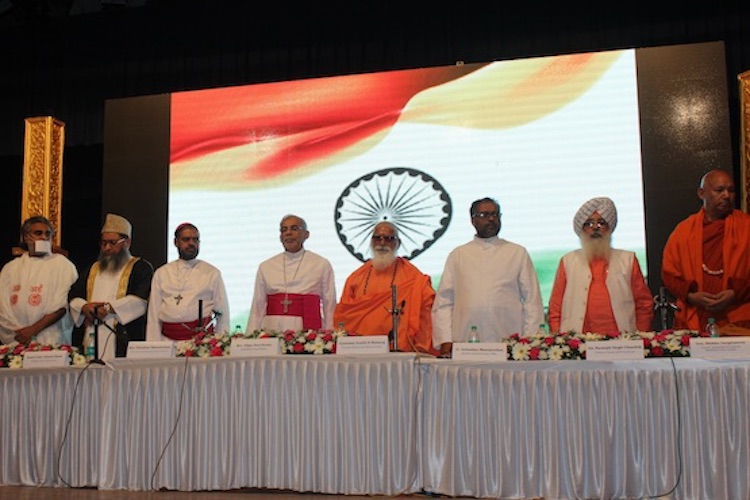 Leaders of six major religions in India have made a joint call to end branding people as patriotic or unpatriotic based on religion amid increasing attempts to exploit religious sentiments for political purposes ahead of a crucial election.

Leaders of Buddhist, Christian, Hindu, Jain, Muslim and Sikh communities gathered on April 5 in the western state of Goa to express their distress at communal tension in several areas of the country.

"We strongly object to anyone taking control of individual decisions. No one is to be categorized as anti-national or non-patriotic based on his religion, region or community," said a statement issued at the end of a meeting initiated by Catholic priests in collaboration with the Indian bishops' conference.

Every Indian has dignity, respect and the right to decide what to eat, who to marry and their faith, the statement said, alluding to pro-Hindu groups imposing restrictions on Christians, Muslims and socially poor Dalit groups.

India is preparing for a national election next year as reports emerge of religion-based tensions in the major states of West Bengal, Bihar and Rajasthan.

Local reports suggest tensions are politically engineered to divide people on the lines of religion and caste as rival political parties project themselves as champions of sectarian interests.

The election in April 2019 is crucial for both the ruling pro-Hindu Bharatiya Janata Party (BJP) to retain power and for rival Congress to emerge from its lost political prominence.

Hindu groups that support the BJP are accused of attacking people who eat beef, arguing the cow is a revered animal in Hinduism, and violently dealing with those opposing Hindu nationalist ideology, branding them as unpatriotic.

Bishop Theodore Mascarenhas, secretary-general of the bishops' conference, said at least 270 sectarian incidents, including vandal attacks on churches, were reported in the past two years.

He said church groups plan to organize "communal amity" gatherings to help and exhort people to "overcome the power of hatred."

The Society of the Missionaries of St. Francis Xavier, popularly called the Society of Pilar, collaborated with the bishops' conference to hold the meeting to mark 40 years of their presence outside Goa, in Mumbai and New Delhi.

Sushil Goswamy Maharaj, a Hindu leader, said that considering non-Hindus as non-Indians is tantamount to an insult. "If today one religion cannot see another, then India cannot go forward," he warned.

Buddhist monk Bikku Sanghasena, founder of a meditation center in Ladakh, said man had made a quantum jump in science but lagged behind in building up human relationships.

He asked people to "come out of the mentality that my country is bigger than yours, my God is superior to yours ... because we live under the same sun and same moon on the same earth."

Imam Umer Ahmed Ilyasi, president of the All India Imam Association, said those who destroy society, especially in the name of religion, are not humans but devils.