As successive donation drives exhaust churchgoers' generosity, there are other ways they can help 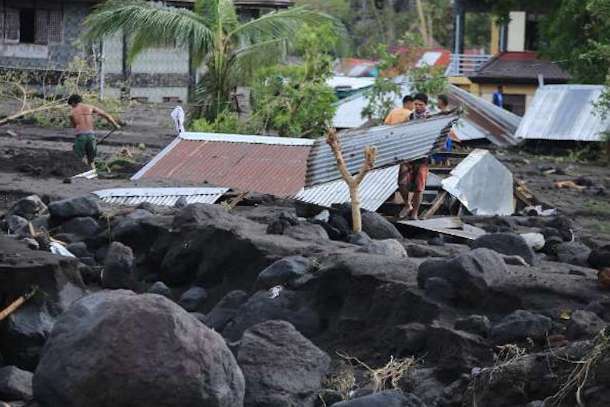 Residents shovel mud and clear debris in an area where houses were buried by boulders and lahar washed from the slopes of Mayon Volcano in the village of Cagsawa in Daraga town, Albay province, after Super Typhoon Goni made landfall in the Philippines on Nov. 1. (Photo: Charism Sayat/AFP)

A famous prayer turned into song is St. Ignatius of Loyola’s Prayer for Generosity: “Dearest Lord, teach me to be generous. Teach me to serve you as you deserve, to give and not to count the cost, to fight and not to heed the wounds, to toil and not to seek for rest, to labor and not to ask for reward, except that of knowing that I do your will.”

This prayer was put to the test by Typhoons Goni and Vamco that ravaged the Philippines archipelago in recent weeks.

The Jesuits’ Tanging Yaman Foundation reported on Nov. 18 that it had distributed relief goods to flooded communities.

“We helped 1,000 families with food packs and bottled water … We also sent 135 cavans [6,750 kilos] of rice to Catanduanes, an island in the Bicol region [south of Manila] also ravaged by the two typhoons,” said Tanging Yaman Foundation head and Jesuit Father Manoling Francisco.

The Vincentians also did their part by visiting those living under bridges in Metro Manila. With volunteer support, they checked every bridge in the capital to see if residents were safe after the floods.

While lamenting that Filipino resilience to natural calamities should not be glorified, Father Pilario said the country’s disaster response showed a lack of government preparedness. “But resilience and creativity have their limits. The Filipino is called to be a resilient person. Of course, what else can they do? When a government does not have a housing program so as to just leave families to live under a bridge the whole of their lives, this society has abused the people’s resilience,” Father Pilario said on social media.

But what if, just what if, people’s generosity too has limits? With many donation drives, Filipino churchgoers and philanthropists have continually extended their hand to aid Catholic Church projects. What if Catholics stop giving donations because they have become tired of giving?

Donor fatigue is described as a phenomenon in which people no longer give to charity projects because they are tired of receiving donation requests.

With massive appeals by religious congregations in the Philippines, numerous churchgoers felt they had given enough to the underprivileged.

And the phenomenon is real.

“I had donated already almost half of my salary to charity works. I think that’s enough. I also need to save for future calamities, especially with Christmas coming,” an anonymous donor to three charities told UCA News.

When someone experiences donor fatigue, does it mean that the person is already not generous?

Despite information to donors and their belief in the work and mission of the Catholic Church, people have experienced that it’s “too much” to give at this time.

One of the things donors could explore is to establish new connections or engagements in their charity work.

For example, instead of giving money, they could join the actual packing and distribution of relief goods. In this manner, they contribute time and effort, not only money or material possessions.

Another way is to help look for other donors within one’s circle of friends or among family members, so you expand the donor group and introduce the project to others.

Lastly, people may volunteer to send “thank you” messages to fellow donors to establish the spirit of gratitude and sharing of one’s resources.

Donor fatigue happens when people lose investment in the act of giving or charity work. When they are desensitized by too many donation requests, they need to take a few steps back to reassess the reason for giving.

Donor fatigue is not a myth. It is a reality. In a country like the Philippines plagued by natural and man-made calamities, one must not lose sight of what’s important — faith in Christ and love for neighbors.