The government needs to create laws to protect them from exploitation 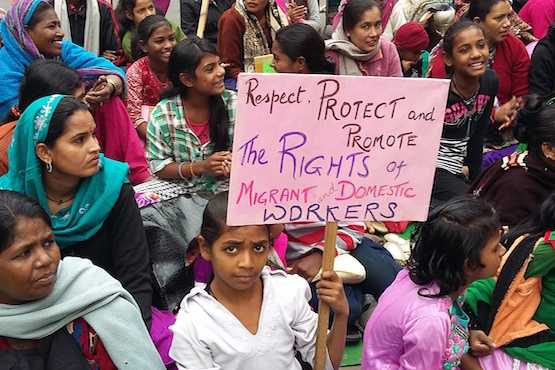 A file photo of domestic workers rallying for their rights in New Delhi. (ucanews.com photo by Ritu Sharma)

Sunita Devi gets up at 5 a.m., cleans the house and cooks for her family of four. Then she rushes to her job as a domestic worker.

She works in five houses in New Delhi from morning till evening earning a maximum of 1,500 rupees (US$22) per month from each house that she sweeps, cleans and washes.

Devi says that the rising cost of living is making things even tougher.

"My husband hardly earns anything," she told ucanews.com. "I have to earn the money to feed my two sons; sometimes it gets difficult to make ends meet,"

Devi, 24, starts her day with a single cup of tea. She doesn’t get a meal until the afternoon when she can take enough of a break to rush home and cook something for herself and her children.

"Sometimes people from the homes where I work give me some leftovers to eat," she said. "There is no dignity for a domestic worker but we need money so we have to bear it."

In India, domestic workers are employed to clean, cook, babysit and do odd jobs. Sunita is one of several million. They are voiceless because their profession is regarded as unskilled and they don’t have unions.

According to India’s National Sample Survey Organization, there were 2.52 million domestic workers in the country in 2009-2010 but the International Labor Organization (ILO) estimates the number is closer to 4 million.

Common problems include under or nonpayment of wages, no holidays, termination of employment at the whims and fancies of the employer, and physical, mental or sexual exploitation.

"We too have family occasions to celebrate," Kumari says. "But we are not supposed to take time off; if we do we’ll be kicked out."

Even though the Indian government supported the ILO’s 2011 Convention, Decent Work for Domestic Work, it has not yet been ratified it.

The convention, adopted in Geneva in 2011, requires each member country to fix a minimum wage for domestic workers, ensure security and decent living conditions.

June 16 is International Domestic Workers’ Day, and the Domestic Workers’ Forum, a unit of Chetnalaya, the social service wing of Delhi Archdiocese, organized a program to spread awareness about the rights of the domestic workers and the ILO Convention.

Around 300 domestic workers from Delhi took part in the event demanding the Indian government ratify the ILO convention and make a law securing the rights and welfare of their community.

"The Indian government made a positive step when they supported the convention," Gaurav Tomar, legal advisor of Chetnalaya’s Domestic Workers’ Forum, told ucanews.com. "But it’s been five years and there hasn’t been any implementation."

Tomar says that it is high time that the government creates a law for domestic workers to protect them from exploitation.

"People want domestic workers to take care of every small thing," says Tomar. "But they don’t want to pay… this is not how it should be. These workers are chronically undervalued."

"The struggle will continue until the demands are met," he adds.

A total of 5,000 domestic workers are registered with the Chetnalaya Domestic Workers’ Forum. It empowers domestic workers by informing them of their rights and encourages them to raise issues and concerns.