Doing right by our children

The Korea Church must do more for early education 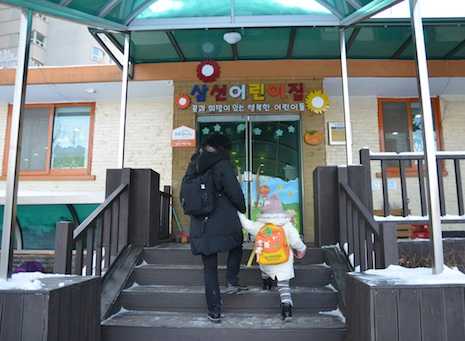 Last week, I visited the childcare center that my 4-year-old daughter attends for an annual one-on-one talk with her teacher.

She told me about my daughters’ progress during the year, what she is doing well and what she needs to work on.

And then, she asked me if my daughter would attend the nursery school next year.

The main purpose of the talk, I guess, was my daughter’s enrollment for next year, because there are more than 360 kids on the waiting list to enroll at the center, which has a capacity to serve 65 children.

If my daughter were to give up her enrollment, that would make room for a child on the waiting list.

Many dual income families have no good alternative to childcare centers. Hiring a nanny would require one of the couple’s total salary. The centers care, feed and educate the kids at a cost of less than US$300 a month.

Furthermore, the government provides subsidies for families in the bottom 70 percent of income earners.

Of course, there are numerous childcare centers. According to the Ministry of Health and Welfare, as of 2011, there were 39,842 childcare centers in South Korea that accommodate 1,621,948 children.

Compared to the fact that there were 2,219,084 children aged 0 to 4 in the 2010 census – who are now aged between 2 and 6, nearly all children of the appropriate age could be placed in the centers.

The problem is that most parents want their children to attend public centers such as the one my daughter attends.

We often hear news about alleged child abuse at private childcare facilities – these vary from reports on beatings to the use of unsafe foods.

It is natural that parents should prefer public centers, which are more closely regulated by the government, even if this requires putting their names down on a long waiting list.

Among Korea’s total number of centers, only 2,116 are public facilities. This is not to say that all private facilities are bad. They are serving children as well as they can, but anxious parents want what they think are “credible” centers.

Every morning, Lucy Yoon Sun-mi takes her two sons to a public center before going to her office, although the center is on the other side of town from her office and adds 30 minutes to her rush hour commute.

“We recently moved to the current house and have to wait for a long time to send my kids to nearby public care centers. There are several private ones, but I can’t trust them,” she said.

Of course, there are childcare centers run by the local Catholic Church. And among the parents regardless of their religion, their popularity has skyrocketed even beyond the public ones. It is because they deem the Catholic Church to be more trusted than any groups.

As an example, one care center run by a female congregation has 1,333 children on its waiting list. Another administered by a Seoul parish has 928 children on its list – several hundred more than are generally on the public center lists.

Despite their popularity, Church-run centers are in short supply – only 59 in the country.

In contrast, the Church runs more than 1,200 social welfare facilities for women, youth, the disabled, the elderly and others.

One nun who works in a Church nursery school says the operating costs for nurseries is high and regulations are strict, which makes many congregations and parishes hesitate to establish them.

But when it comes to the care and education of children, the Church should lead the way, despite the obstacles and difficulties.

Children are the most vulnerable members of society, and they need the most care. As the poorest of the poor, so to speak, they should be the focus of more of the Church’s social activities.

There are nearly 1,700 parishes in the Church in Korea. If just a few of them dedicated their resources to the creation of nursery schools, it would make a big difference in meeting the growing need for parents to put their children under the guidance of trusted centers.

The resources would be better spent – and reap much greater rewards – than the costly construction of a new parish building or other such facility.

The better care of children, after all, is more in line with the mission of the Church to proclaim the Good News to the world.

John Choi is a journalist and commentator based in Seoul