Does a black Jesus matter?
While there are historical reasons for the dominance of a white Jesus, every race and culture can make him their own 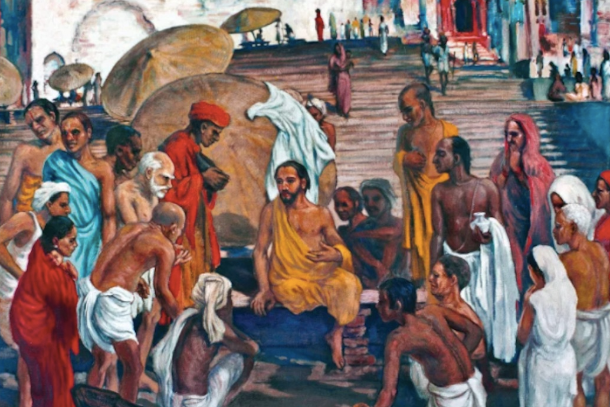 Indian artist Frank Wesley's work 'Jesus in Varanasi' presents Christ as an Indian (sitting center in yellow robe) conversing with people on the banks of the Ganges, the Hindu holy river. (Photo: indiaartsmovement.wordpress.com)

One of the spillovers of the Black Lives Matter campaign in the US is the aggressive reaction to the names and statues of dead white men whose racist legacies continue in many institutions in the West.

So we have seen statues of Confederate generals and politicians demolished, the names of  institutions changed, and we’ve applauded the demands for greater racial inclusivity in the public sphere.

This is why Black Lives Matter, like the earlier Me Too movement, is a revolution of sorts. It challenges existing norms and patterns, and it calls out loudly for change. All revolutions do this.

But these demands are not just for sociopolitical change but for a change of attitude as well. And this means religious change too — for nothing so shapes our beliefs and mindsets as the religious values which influence our lives.

And many of these values are imbibed unknowingly from the pictures and movies we see.

A little story will illustrate what I mean. An American evangelical group once commissioned well-known Indian Christian artist Frank Wesley to paint a mural for a new church being built in Tokyo. Wesley chose as his theme Christ raising the paralytic by the pool (John c. 5). When the mural was completed, he invited his sponsors to view the painting before it was installed in the church. Some board members did so and then huddled together agitated before confronting the artist. “Mr Wesley,” they protested, “we can’t use this picture! You’ve painted Jesus Christ as a colored man!”

Thus the question: are our imaginations so colonized that whatever is white is pure and beautiful, and black becomes ugly and demonic? In other words, do we ever critique the sacred figures and persons we revere and pray to? How do we imagine our gods and saints? What lies at the root of such fantasies?

This is not just a Christian issue, though this article will restrict itself to just the Christian culture. Rather, its ramifications reach far beyond. It affects all religious symbols — the ways Hindus depict their gods and goddesses, their devas and asuras; why Muslim iconography is adamantly against any human image; and the lurid sexual imagery found in many tribal sanctuaries.

Typical images of Jesus and the saints

The traditional religious imagery, which many of us Asian Christians have grown up with, has been Western. It is, may we say, a white man’s fantasy.

Jesus is presented as a white man, with long blond hair and a beard, and draped in a white and red flowing garment. God the Father is an old white man with a flowing white beard, and the Holy Spirit is a white bird! Mother Mary, also in white and blue, is sexless and insipid. Angels are usually nubile young women in flowing white, with eagle’s wings (never mind that all the biblical names for the angels are masculine), and devils are always ugly black men with horns, bat’s wings, cloven hooves and a dragon’s tail.

Thus does imagination shape our piety and devotion. Countless examples of calendar art and church statuary reinforce these impressions.

Few of us would ever publicly question such depictions, so thoroughly have we taken them for granted. For such depictions, like church architecture, ritual vestments and hymnody are part and parcel of  a complex of  signs and symbols which took the Christian neophyte away from his indigenous roots and gave him a special identity, a new reference group — a foreign, Western ethos — whose main attractiveness lay in being distinct and different from his native background. If it was foreign and Western, it was certainly better. Generations of Christians thought so.

This is why when, in more recent times, contemporary Christian artists have attempted to give churches an indigenous look (modeling them on temple architecture, for instance) or to give Jesus a dark, indigenous face, and Mary an indigenous saree, these very innovations have met with resistance or disdain from Christians themselves.

What each generation wants

The same can be said of the ways in which Christians in Asia see themselves.

In converting to a new way of life, earlier generations sought to escape caste oppression and the humiliations inflicted on them by their native religious establishment. The neophyte consciously opted for a better life in terms of  personal dignity and freedom. Changing their gods and changing  their names was one way to achieve this.

Where their more primitive deities thrived on fear and appeasement, Jesus and his saints offered peace, healing and sense of  egalitarian community. So what if they looked different? It was better that they were different!

Over the years, the wheel has come full circle. Those who had hoped for dignity and freedom in the new community they joined have found that prejudice, discrimination and hostility exist even there. For the Church is not the egalitarian society they had hoped for but is also riven by caste factions, rigidity and contempt for the poor.

The white Jesus brought to his faithful the very same bias and arrogance of pagan religions in the different forms of racism, sexual inequity and class differences we see today. The recent scandals in the Catholic Church related to sexual abuse and finances are surely proof enough.

Why a black Jesus matters

We began by asking: Does a black Jesus matter? Paraphrasing this, we ask again: Does a Dalit Jesus matter? Or a poor Jesus? Does a Jesus matter who asserts the place of women in his life?

Yes, it does. This is what incarnation means — Jesus is a wholly Jewish man, with a brown face and skin, a black body, Mongolian features and a Polynesian stature. Every race and culture can make him their own.

Artists know and respect this. Our mindsets should follow, giving due space to this new imagery.

While it is true that there are historical reasons for the dominance of a white Jesus, today each community wishes to assert itself proudly in its own skin, demands respect and identity, challenging the inaccuracies and inequalities  of the past.

And when this takes place everywhere and in every culture, then the prayers in our hearts will match the images in our minds.